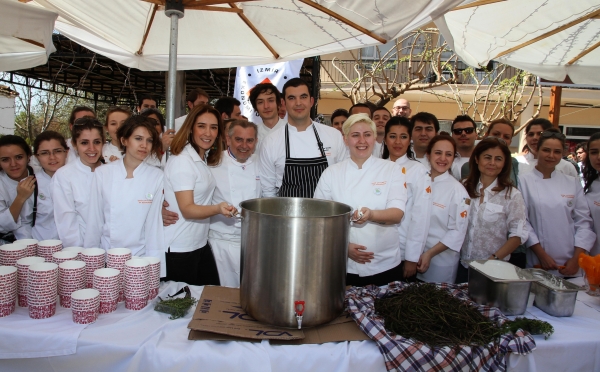 The young chefs of Izmir University of Economics (IUE) Department of Culinary Arts and Management created a delicious soup with the Aegean herbs. Michelin starred French Chef Joseph Viola, who came to Izmir as part of ‘Achieving a Star for Aegean Cuisine Project’, Executive Chef Osman Sezener, Lecturer at IUE Department of Culinary Arts and Management, and students cooked a soup by using 18 different Aegean herbs and offered to guests at the Herb Festival organized at Özbek Village, Urla. There were long lines to taste the exquisite soup which was prepared with a French cooking technique by using the cure-all Aegean herbs.

Chef Joseph Viola, who is training the young chefs with a technique specific to him, visited the local values on-site as part of the second phase of the project, stated that he was very impressed with the herb-based cuisine of the Aegean Region. Chef Viola stated that he had different experiences each time he visited Turkey. He said, “I am very pleased with the energy the University offers. I enjoyed Izmir and the Aegean cuisine very much. I’ve never worked with so many herbs before. The festival was very impressive. I am pleased to see people come and taste these herb-based cooked meals. Turkish – French partners work together because there is such a need. I think students will have positive outcomes from this interaction. IUE works very hard to increase the knowledge of its students.”

Prof. Dr. Nazan Turhan, Director of IUE School of Applied Management Sciences, stated that the students made soup and offered to public for the first time under the guidance of two chefs. “The students created a new soup by using the Aegean herbs. They worked as a team outside the school environment for the first time.  They offered it to the public. They experienced the pros and cons of it. We will continue to get involved in such activities,” said Prof. Dr. Turhan.

Chef Osman Sezener also stated that the festival was very beneficial for students in terms of gaining experience. Chef Sezener stated the following:

“We created this soup to combine Turkish-French cuisine culture, and to come up with a taste with herbs unique to our country at a place where 'slow food' shines out in Urla. We used 18 different kinds of herbs. Both Turkish and French cooking techniques were used, and the soup was served to 500 people. It was a different experience for everyone. Awareness on “slow food” and collaboration with France is increasing.”