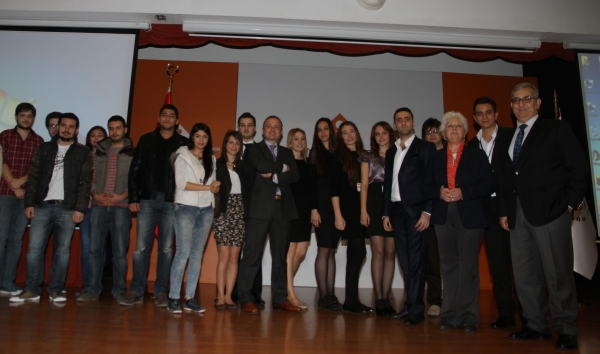 The “International Trade and Finance Summit 2013”, organized by Izmir University of Economics International Trade and Finance Club, brought together the leading names of the field. Alphan Manas, Honorary Chairman of the Turkish Futurists Association, who delivered the opening speech of the summit, shared his experiences with the students in his presentation titled, “Creativity and Innovative Entrepreneurship”.

Manas stated that it was important how much value the people created. “Entrepreneurship became a very loose concept in Turkey. What matters is to foresee the future and take action beforehand. Neither vision nor knowledge is sufficient sometimes, not even being a futurist. Our future is being shaped by family and community directly or indirectly. We make life altering decisions as we dwell on fortune, fate, destiny,” stated Manas.

‘The secret is to know yourself’

Lack of knowledge makes room for slyness, stated Manas and said that being prepared and knowledgeable was important when coincidences occurred. Manas said that learned despairs were experiences that affected the human life negatively and that he had dyslexia and even though he was good at learning he failed in a classroom environment. Manas said, “If we don’t know ourselves, we won’t be able to design our future. I found out that I had ADHD and Dyslexia at the age of 35. The instinct of doing even the routine things differently by taking a risk is the indicator of creativity. Intelligence is one of the talents, but not the only one. Talent is natural thoughts, behaviours, and emotions. They develop in the early ages. Ability is the answer to the question of how. It is relayed and developed.”

Prof. Dr. Oğuz Esen, the Acting Rector of Izmir University of Economics, in his opening speech stated that the world economy rapidly globalized starting form the second half of the 1980’s up until 2007. Esen stated the following:

“International banking activities improved rapidly. But all that was interrupted due to the global crisis in 2007. It was thought that the crisis caused depression. It’s being said that international trade will depend on bilateral agreements from now on, and studies will be conducted at regional level.  Existence for new protectionist measures is seen in order to improve export.”

Ceyhun Cihat Yıldırım, President of IUE International Trade and Finance Club, stated that they aimed to benefit from the expertise of their guests in 9 sessions throughout the 3 days. Anthony Wilson, Corporate Finance Director of Deloitte, Hikmet Altan, CFO of Yaşar Holding, Barış Yeşilyurt, Director of HR Strategic Planning, Employment, and Career, were among the leading names that attended the “IUE International Trade and Finance Summit 2013” organization.