HIS DESIGN BECAME A REMEDY FOR FRACTURES 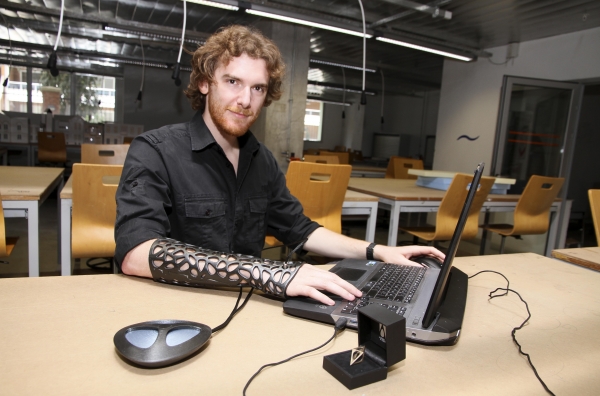 Deniz Karaşahin, Graduate and Lecturer of IUE Department of Industrial Design, Faculty of Fine Arts and Design, is making a breakthrough in fracture treatment with the arm cast model he designed. As Karaşahin was awarded 2014 Golden A'Desing Award, an international contest held in Italy, his custom design arm cast designed thru 3 D printer technology will contribute to medical world greatly. His "Osteoid Medical Cast", which received an award in the category of 3 dimensional print forms and product designs, aims to shorten the treatment process of fractures 40%.

Karaşahin, who gave information about his design, said that he followed 3 dimensional printer technology closely, and he said, “Medical sector is a leading sector in technology based production. The holes on my cast design prevent the itches and bad odour people might experience. Thanks to my design with low-intensity pulsed ultrasound (LIPUS) technology, the fractures heal much faster.”

'You may swim with your cast'

Karaşahin also stated that he completed his design in 4 months and that his design was waterproof, and people could take a shower or swim with their cast on. He said that he got inspired by human skeleton when he was designing the shape of the cast and the holes on the cast. Karaşahin, who said that the traditional cast did not grasp the body, stated the following:
"The bone tissue is stimulated by sound in 20 minute sessions. This results in 40% faster healing. There is an increase in sclerosis up to 80% in partial fractures. The body geometry needs to be established first in order to put the cast on. The body gets scanned 3 dimensionally. Later on, the cast design is made via a computer software. The holes are made with a special algorithm. When the design is completed, the 3 D printers prepare the cast in 3 hours. We install the tool that gives off ultrasonic frequency on the fracture with the help of the holes.”

Karaşahin said that the cast was made out of ABS plastic, which was non-allergenic and approved by alimentary products law. He said that the material was 100% recyclable. Karaşahin also stated that he has been winning his third award in the same contest. He said that he previously was awarded for his sink and long play designs.

'The design should reach out to whole humanity'

Karaşahin indicated that he would continue to work on designs that would be beneficial to everyone, he said, ''We will continue with medical research and trials. Fractures are the most common complaints with a prolonged recovery process. I created my design to shorten and make this process more comfortable. Now, it’s time to popularise this product and get it used by everyone.''