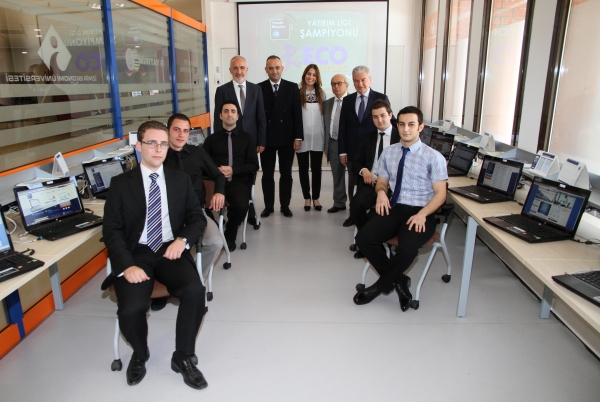 Izmir University of Economics came in first place among 20 groups from 6 universities in the "Inter University Investment League Portfolio Comptetition" held by İş Yatırım Menkul Değerler A.Ş. (IS Investment). Students had a chance to monitor the economic data in domestic and foreign markets, and carried out virtual transactions throughout the year as part of the Trade Master Economics Platformu established within the universities by IS Investment. Investment champions came out of IUE.

The group named “EcoInvestors” by the students of IUE Department of International Trade and Finance, made the most profit and became a champion in the competition where Bosphorus, Metu,  Bilkent, Yaşar, and Bilgi universities also participated. IUE EcoInvestors group included students Ceyhun Yıldırım, Çağın Demirağ, Eren Bektaş, and Melih Kabadayı.

‘From virtual to real championship

Ekrem Demirtaş, President of IUE Board of Trustees, and Prof. Dr. Oğuz Esen, Rector of IUE visited the students at Trade Master Economics Platform, and congratulated them. President Demirtaş stated that being successfull always brought happiness and he said, "What is important is that the students become successfull in real life just like they became champions in virtual life. İş Bank provided us with this opportunity. We hope that our students will excell in earning money with securities, which is the topic of our era.”

Prof. Dr. Hasan Baklacı, IUE Head of Department of International Trade and Finance, received training as part the project and made transactions in Borsa Istanbul and Derivatives Exchange, and Chicago Exchange. Baklacı said, "The students made real transactions in virtual environment established by IS Investment. Our students, who had a chance to know the finance markets up close, became in first place at the interuniversity competition.” 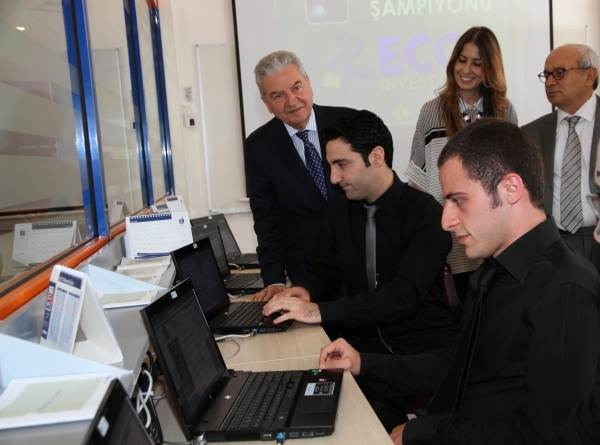