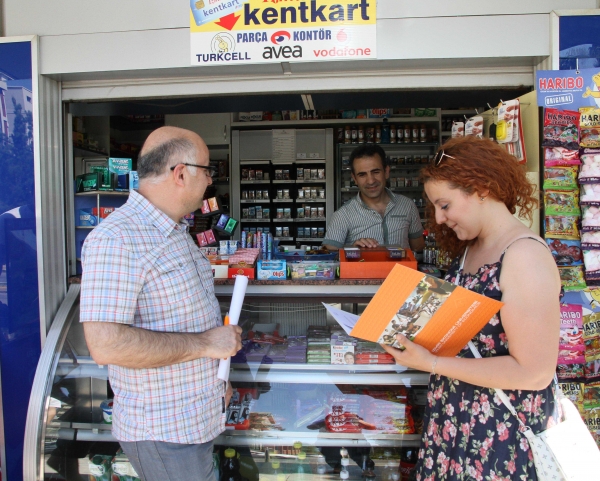 Izmir University of Economics (IUE) put Balçova shopkeepers under the microscope, who explain their situation clearly by saying, “How can I compete against a supermarket who sells even a loaf of bread with a credit card?” Prof. Dr. Erol Kahveci, Head of IUE Department of Sociology, and his students conducted one on one interviews with 700 shopkeepers in Balçova. 76% of them stated that the shopping malls negatively affected their businesses.

Prof. Dr. Kahveci, who gave information about the “Shopping Malls in Balçova and effects of Izmir University of Economics on small businesses” titled study, said that 5 big shopping malls in the neighbourhood opened in the last 10 years one after the other. He also said that their study focused on shopping malls and shopkeepers who were selling the same group of products such as food, clothing, and electronics. Prof. Dr. Kahveci indicated that 76% of the shopkeepers’ interviewed were males whereas 24% were females. He also said that 68% of them lived close to their businesses. Prof. Dr. Kahveci said, “The shopkeepers stated that the biggest reason they were in trade business was the fact that it was a close proximity to where they lived. 92% of them stated that it was their only source of income. 76% of them pointed out that shopping malls negatively affected their businesses. One of the grocery store owners expresses his feelings with the following words, “How can I compete against a supermarket who sells even a loaf of bread with a credit card?”

“The data revealed that the shopkeepers kept their businesses open for an average of 13 hours daily in order to raise their sales, and in 80% of the shops, total man power was 1-3 in order to lower their expenses. Also, 80% of the businesses stated that they downsized. When we analysed how the competition against shopping malls affected them we found out that one in every four businesses stated that they did not make any profit at all. They said that they were not in a position to compete any more. They said that other businesses lowered their prices to keep their profit margins at minimum, and they came up with services such as, ‘call us and we’ll deliver, or you buy, we’ll take it’ that involves using credit cards. Despite all the precautions they take, 74% of them put the blame on shopping malls when it comes to losing customers. Again, 72% of shopkeepers believe the reason for small businesses to lose jobs are the shopping malls.”

Prof. Dr. Kahveci stated that the shopping malls were located in the North of Balçova and South of IUE. The businesses in close proximity to IUE, which was established 13 years ago, were affected positively. Prof. Dr. Kahveci said: