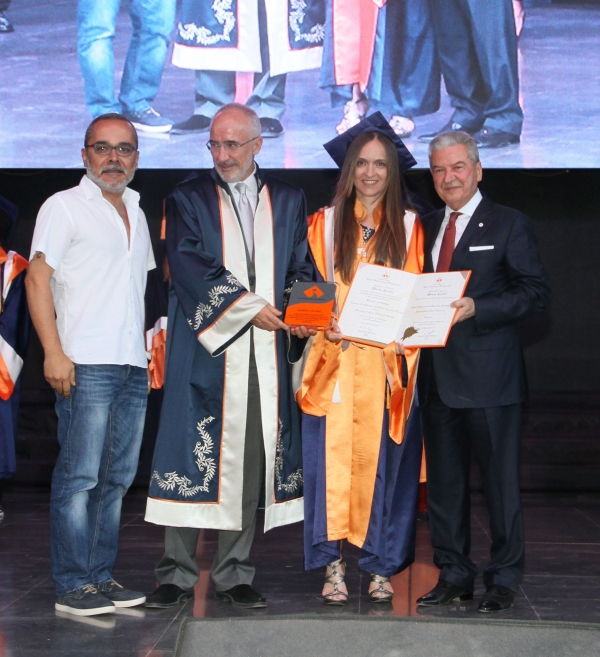 Merve Çelebi, who graduated from her second university some 20 years later, graduated as the top student of Izmir University of Economics (IUE) Faculty of Fine Arts and Design, Department of Interior Architecture and Environmental Design.  Çelebi quit working her job as Director of Foreign Economic Relations at Izmir Chamber of Commerce when she had her daughter Maya in 2005, and opened the door to her dream profession when she took the university exams again in 2010. Çelebi also set an example to her family members by graduating from a second university years later. Çelebi’s economist sister studies graphic design, and her optometrist husband’s sister studies photography.

Çelebi mentioned that she graduated from Bilkent University, Department of International Relations with honours degree in 1994, and moved to Izmir with her husband in 1997. She said, “I passed the exam held by Izmir Chamber of Commerce in 1998 and started working as assistant specialist in Directorate of Foreign Economic Relations. I’ve published various articles and books on economic and commercial relations of Turkey with foreign countries. I became director in 2003. I gave birth to my daughter Maya in 2005 and took a break from the business world.” Çelebi said that as her daughter started school in 2010, she became a student again as well.  She started studying at Izmir University of Economics, Department of Interior Architecture and Environmental Design.

Çelebi, who said that she was always interested in architecture and design, stated the following:

“During the open days I visited some of the major schools in Izmir and got information. Meeting with Tuğyan Aytaç Dural, who would be my future instructor for the Basic Design course, guided me positively in making my choice.  Those 4 years I spent were important milestones in my life. Design is more than a profession; it’s a way of life. Not only did I have a new profession, I also had new perspectives with my new friends, teachers, and a world full of design. It allowed me to update myself. I had 2-3 sleepless nights a week, but it paid off as graduating the top student of the department. I wouldn’t have done it as a mother, spouse, and a student without the support of my family.”

Çelebi pointed out that she would continue her career as a designer and continue to self-improve and get involved in international studies.