THE HIDDEN HISTORY OF BRIDAL GOWNS KEPT IN CHESTS ARE REVEALED 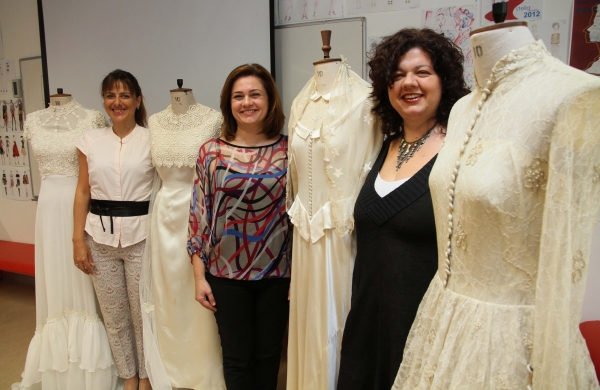 The history of the purest white, the wedding gowns, is springing back to life in the hands of lecturers of Izmir University of Economics (IUE) Faculty of Fine Arts and Design, Department of Fashion and Textile Design. The studies, on identifying the fashion trends in Turkey starting from 1920’s and developing a history in this area in Izmir which is prominent in bridal gown sector, were presented at the 6th Fashion Week that took place at Oxford University, England. Prof. Dr. Elvan Özkavruk Adanır, Head of IUE Department of Fashion and Textile Design, and Lecturers Özge Dikkaya Göknur and Seda Kuleli stated that they were interested in the old bridal gowns being kept at chests at homes of people who would be willing to support the history of Turkish bridal gowns.

Prof. Dr. Elvan Özkavruk Adanır stated that even though bridal gown sector was very important in Izmir there were not enough studies on the history of this area. She said, “Even though some exhibitions and museums about bridal gowns throughout Turkey were available, Izmir was lacking in this area. We started to collect bridal gowns and especially pictures of them approximately one and a half year ago from people we know. We have so far 15 bridal gowns for this project. And the number of pictures we have is 150 covering the period from 1920’s until the end of 1970’s.”

Lecturer Özge Dikkaya Göknur pointed that they followed the fashion trends closely in their study on the bridal gowns they attained. “We researched about fashion and fashion transitions, finding materials, and comparison of equivalent values. We found out that when lace was in fashion in 1940’s worldwide; Izmir and surroundings used similar fashion trends as well. In 1950’s and 60’s embroidery was fashionable whereas in 1960’s and 70’s synthetic fabrics were being used more,” said Göknur.

‘Bridal Gowns in Chests Will Come Back To Life’

Lecturer Seda Kuleli stated that they presented their paper titled, “Beyaz ve Büyüleyici (White and Mesmerizing)” at the 6th Fashion Week that took place at Oxford University, England, which received a great deal of attention. Kuleli said that they continued their research and pointed out the importance of attaining more old period bridal gowns. Kuleli also said that anybody interested in sharing their bridal gowns or gown pictures can contact IUE Faculty of Fine Arts and Design.