INTERNATIONAL TOUCH TO THE POTTERY 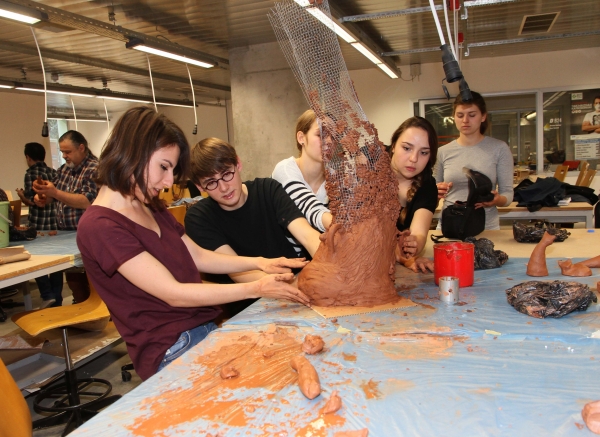 Menemen pottery will be making an international debut through collaboration of Izmir University of Economics (IUE) and Academy of Fine Arts in Warsaw and Menemen Potters Association. An International Pottery Workshop (KULP) took place with the participation of Polish and Turkish students in order to promote Menemen pottery worldwide and get pottery the design and identity it deserved. Students, who visited the workshops in Menemen, brought back some clay and created their designs at IUE Faculty of Fine Arts and Design.

Asst. Prof. Dr. Can Özcan, Head of IUE Department of Industrial Design, who provided information about the workshop, said that Menemen pottery was a handicraft that continued for many generations, but there was no planning made regarding the future of this profession. He stated that they have been working on this project with Academy of Fine Arts in Warsaw for 2 years as part of 600th anniversary of cultural and diplomatic relations between Turkey and Poland. Özcan reported that 20 Polish and 10 Turkish students received one week training from pottery masters in Menemen and that they would be working on their clay designs throughout the semester. “The students got acquainted with pottery in the first phase of the project. We want our students to go beyond what is obvious; we want them to create surplus value for Menemen pottery.”

Asst. Prof. Dr. Özcan stated that the Polish team would continue their studies on this project in Poland, and get advice from the pottery masters in Menemen about producibility of the products they will be designing. Özcan pointed that the main purpose was to create a trademark for Menemen pottery. Özcan also indicated that the designs would be displayed in Turkey and Poland later on.

Prof. Michal Stefanowski, Lecturer at Academy of Fine Arts in Warsaw, stated that it was the first time the students got acquainted with Menemen pottery and they were very impressed with it. Prof. Stefanowski said they would continue their studies on Menemen pottery in Poland and display their products and try to generate marketable products.

Ertan Saruhan, Head of the Menemen Pottery Association, stated that they got involved with university-industry collaboration in order to create a trademark Menemen pottery. Saruhan said, “Pottery is our patriarchal profession. We get engaged in collaborations because we want to carry this traditional profession into the future.”