FUTURE OF NAZILLI IS AT IUE 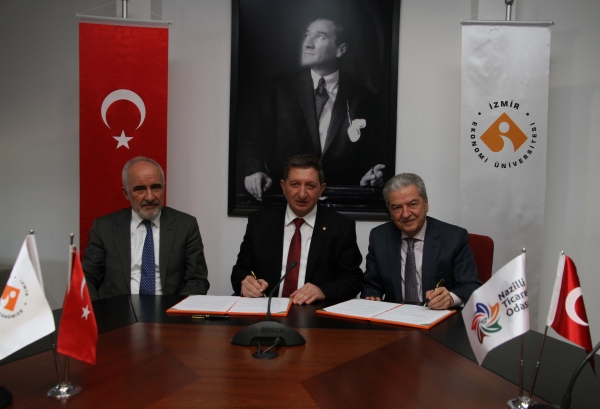 President Ekrem Demirtaş stated that they established Izmir University of Economics in 2001 in order to execute the will of their ancestors at the 1st National Economy Congress. “We executed the will of the trade authority that convened at the 1st National Economy Congress, about chambers of commerce establishing universities in big cities. Therefore, we started out with training students who will meet the demands of business world as a mission,” said Ekrem Demirtaş.

President Demirtaş pointed that the University stood out with its double major programs and medium of instruction as English. He said that there were many successful students from Nazilli studying at IUE and they expected that number to go up in the near future.

Nuri Arslan, Chairman of Executive Board of Nazilli Chamber of Commerce, said that they were aware of the high quality of education at Izmir University of Economics, and the protocol played a major role in paving the way for the youth. Arslan said, “We believe that such protocols will be the beginning of better collaborations in the future. Our county, Nazili is larger than 39 cities today. I believe that in the future we will have many more students at the University.”

IUE Rector Prof. Dr. Oğuz Esen stated that the university offered 8 faculties, 2 vocational schools, 2 schools, and 2 graduate schools and over 7 thousand students. Prof. Dr. Esen said, “We are one of the 23 universities that ranked in the first 500 universities worldwide. We offer a second foreign language in addition to English. We train innovative and entrepreneurial students. The youth will get a high quality of education here at Izmir University of Economics.”