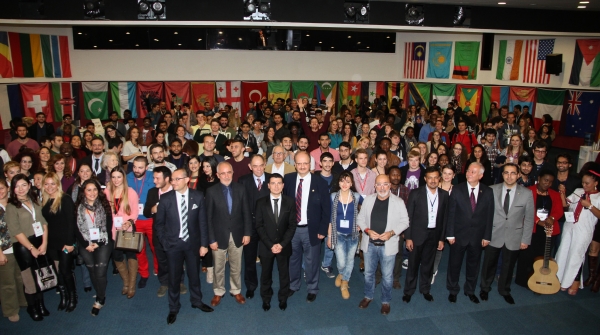 Students from 5 continents around the world came together at the 1st International Students Day held at Izmir University of Economics (IUE). Over one thousand foreign national students from 114 countries had a chance to meet each other and share their cultures at the event organized by “Study in Izmir”, a sub study group of Izmir Universities Platform that is established by 9 universities in Izmir.

Full time students and ERASMUS students, who are studying at Izmir Economics, Ege, Dokuz Eylül, Kâtip Çelebi, Yaşar, Izmir, Gediz, Şifa universities and Izmir Institute of Technology, came together at IUE Conference Hall adorned with flags of 114 countries from 5 continents. Students exchanged ideas about their countries and studying at Izmir. The event went on with a mini concert and African Kolbastı Group and American Dance Group entertained the audience with their performances.  Prof. Dr. Galip Akhan, Term President of Izmir Universities Platform and Rector of Kâtip Çelebi University, Prof. Dr. Murat Barkan, Rector of Yaşar University, Prof. Dr. Oğuz Esen, Rector of Izmir University of Economics, Asst. Prof. Dr. Cengiz Üzün, General Coordinator of Izmir Universities, and Dr. Fırat Yaldız, Izmir Coordinator of Presidency for Turks Abroad and Related Communities, also accompanied the students on this big event.
IUE Rector Prof. Dr. Oğuz Esen stressed that Izmir was a university city and he said, “Izmir is an ideal place for university students to live in terms of its historical, cultural, and climatic aspects. Therefore, Izmir has a potential to attract many students from both overseas and within Turkey. We’ve decided to take action together as Izmir Universities Platform. Our motto is higher education in Izmir.”

‘We want them to mingle’