SWEET DREAMS ARE MADE OF PAPER 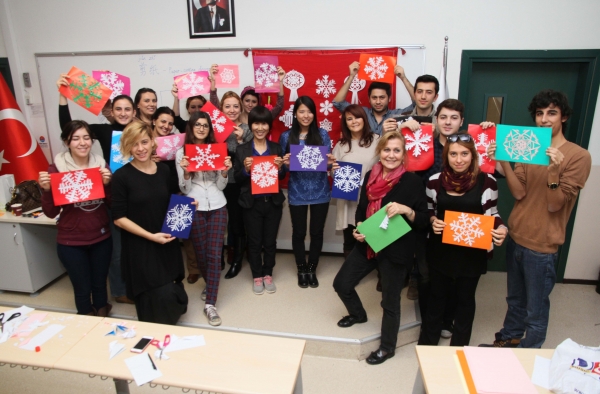 China’s popular New Year’s tradition revived at Izmir University of Economics. Students, taking Chinese as a second foreign language at IUE, got hands on training on Chinese paper cutting, which Chinese people believe that can bring good luck, piece, and happiness to the whole family. Students and academicians put their wishes for 2015 on paper at the fun activity guided by Zhiping Xu, Chinese Art Teacher from Chinese Consulate of Izmir.

IUE Chinese Instructor Yuan Peng, the coordinator of the event, stated that they also wanted to introduce the cultural aspects of the language. “Paper cutting is a tradition still very much alive in China. Every year we prepare paper cut decorations reflecting our wishes to come true in the New Year. They are not sold in stores; all the family members get together and make these meticulously. And you get to make your wishes while preparing the decorations,” said Peng.

Chinese Art Teacher Zhiping Xu pointed out that they organized their first activity at Izmir University of Economics and she said, “The official opening for Chinese Consulate of Izmir will soon take place. We are pleased to know that IUE offers Chinese as a second foreign language. We will be engaged in more activities at IUE later on. You are establishing a friendship bridge between Turkey and China by teaching Chinese as a second foreign language at IUE. Our activities will contribute to collaborations with countries in terms of culture, economy, and education. IUE students will have opportunities to seek education and employment when they come to China.”