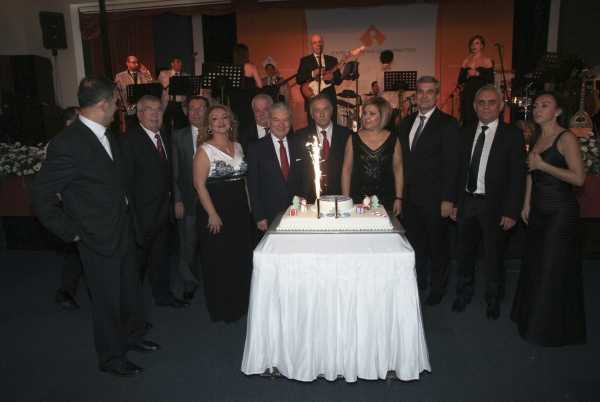 The founding organization of Izmir University of Economics (IUE), Izmir Chamber of Commerce Health and Education Foundation, welcomed 2015 with its members at a New Year’s party held at IUE Conference Hall. The members enjoyed a night of dances and songs, and wished each other a happy new year at the party hosted by Ekrem Demirtaş, Chairman of the Executive Board of ITO Health and Education Foundation. Chairman Demirtaş and the Executive Board cut the New Year’s cake together. Yusuf Öztürk, CEO of Chamber of Marine Commerce Izmir Branch, Hasan Denizkurdu, former Minister of Justice, IUE Rector Prof. Dr. Oğuz Esen and guests attended the party.

The members, who danced to the exquisite songs of the Aegean Band Orchestra, had wonderful time at the party which lasted until the late hours of the night.  IUE Latin Dances Club also livened up the party with their performances. Chairman Ekrem Demirtaş stated that they established the foundation with 39 people, and Izmir University of Economics was their most important achievement. Demirtaş said, “14 founding members have left. I wish good health for the remaining members. They have contributed majorly. They leave behind significant achievements, and Izmir University of Economics is the most important of them.”

Demirtaş mentioned that the establishment of the university was a dream, and not many people believed in that dream. He also pointed that they invested more than $200 million in 80 thousand square meter Balçova Campus. Demirtaş, “We’ve started out with $4 million 150 thousand dollars Izmir Chamber of Commerce funded us. We are not proud of the physical infrastructure in the past 14 years. We take pride in the 8 thousand 400 graduates we produced. All of them have good jobs, most established their own businesses. The University is always taking new initiatives. New departments are being opened each year. We have total of 7 thousand 500 students. We are the only university where medium of instruction is completely English,” stated Demirtaş.

‘We Have Big Dreams’

Demirtaş remarked that Izmir Chamber of Commerce Health and Education Foundation hit the top in education, and he stated the following:

“We have new dreams. We got the permit for the establishment of Faculty of Medicine. We have Vocational School of Health and Faculty of Health Sciences. We started to train our students on subjects as elderly care, nursing, and paramedic.  You will be able to see a graduate of Izmir University of Economics when you go to a hospital from now on. We will start enrolling students for our Faculty of Medicine this year. We’ve purchased the lot next to Balçova Thermal Hotel. We also have 220 decare lots in Güzelbahçe. We will establish a Silicon Valley, a science valley there. It will be a campus that includes education starting from kindergarten all the way to university. It will become a techno park with top quality engineering education. We are in negotiation with American companies. We are in the process of a master plan. Structuring will begin next year.”