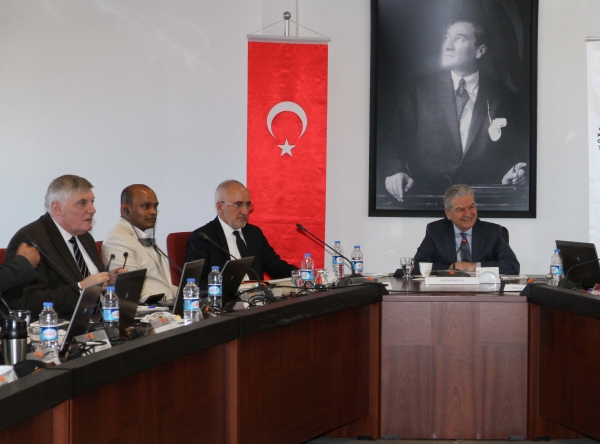 Ekrem Demirtaş, President of IUE Board of Trustees, who indicated that 10 million people graduate from universities worldwide each year, stated that they trained the children of the digital world and that the youth, who produced knowledge and made a difference, existed.  President Ekrem Demirtaş, IUE Rector Prof. Dr. Oğuz Esen, IUE Consultant and Lecturer of National University of Singapore Seeram Ramakrishna, and Visiting Scholar Prof. Dr. Philip Kitchen, deans and members of board of trustees attended the 3rd International Advisory Board Meeting.

Ekrem Demirtaş, in his speech, said that they continued to work on smart class. He said, “We have to train graduates who will make a difference among the 10 million graduates worldwide. We are training the children of the digital world. So much has changed after the 60’s. Globalisation is in effect. We cannot isolate ourselves from the real world. We need to begin with teaching the best English. Children are not after an ordinary information. We are training students who do not access information, but rather produce it. We are almost done with smart class system. Our students will be able to use smart classes in 2015-2016 academic year. They will participate in courses from wherever they want, from their home or from their yard. We will work with academicians who can entertain and teach at the same time.”

IUE Rector Prof. Dr. Oğuz Esen indicated that the university was in progression, and they placed emphasis on international experience and selected the faculty based on that. Prof. Dr. Esen said that the physical infrastructure was underway and they would begin digital orientation next year.

Prof. Dr. Philip Kitchen pointed that IUE was a good quality foundation university. He said, “Izmir University of Economics has a strong structure and its international recognition is increasing. It needs to focus on entrepreneurship. All those internationally high ranking universities have always placed emphasis on research.”