NEXT GENERATION OF COMPUTER GAMES 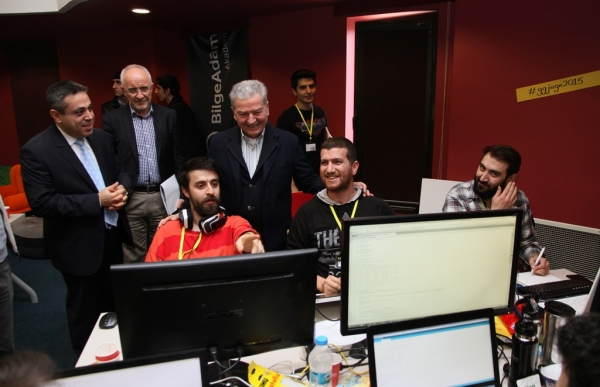 President Ekrem Demirtaş mentioned that he dreamed about the establishment of the university in 1988. He said, "We were able to establish the University in 2001. Before that we traveled to Europe and to USA to observe their education systems. What stuck in my head was a location in Keith Campbell University, Scotland.  Scotland earns $5 billion a year from computer games. The university I am talking about is the one that cloned Dolly; we wonder why we don’t earn that money as a country. We’ve established the first software department in Turkey. As far as I can see, we will exceed Scotland’s $5 billion. Do not ever give up dreaming. You too can become successful like Bill Gates. You can own game companies. Of course, there are high school students among us today; we hope to see them here for their university education.”

Asst. Prof. Dr. Gazihan Alankuş, Lecturer at IUE Faculty of Engineering and Computer Sciences and Head of Event Committee for Aegean 2015 Global Game Jam, stated that the Global Game Jam (GGJ) was the world's most popular game jam event taking place around the world. Alankuş said, "100 participants in teams of 5 developed computer games. Participating students, academicians, amateur and professional game developers teamed up with game developers with different backgrounds and created computer games in 48 hours with little or no sleep. This year’s theme was ‘What do we do now’. Students stayed awake and developed games. They had fun and learned at the same time.”

The award ceremony for Hayalini Oyna (Play Your Dream) titled project, organized by IUE Departments of Computer and Software, also took part. While the game ‘Nightmares of the Past’ came in first place, Project K came in second, and Clara came in third place. 60 high school students learned how to develop computer games on Saturdays for 10 weeks by taking part in either design or software development. They competed along with university students and professionals in Global Game Jam Ege 2015.