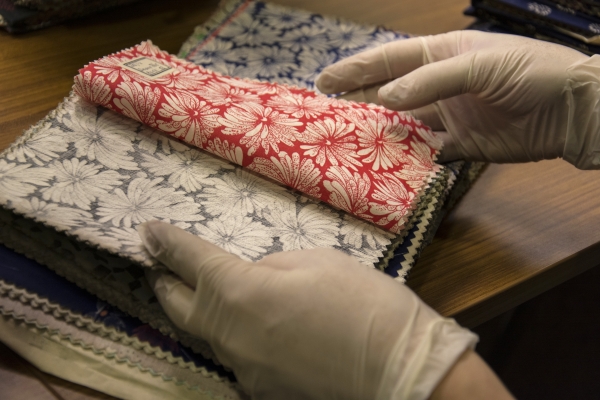 Izmir University of Economics aims to archive thousands of patterns and share them with the sector with its “Establishing Digital Textile Design Archive and Virtual Museum” titled project supported by Izmir Development Agency (IZKA). A digital pattern archive will be established at the end of the project where researchers, designers, students, industrialists, and professionals from various organizations will be able to utilize, and cultural heritage of Sümerbank (Sümerbank was established in 1933 as a state owned bank for funding the construction of textile factories and the development of the textile industry in Turkey) will be transmitted to future generations.

Sümerbank, which set a model for the public in Turkish industrialization and has been considered the backbone of Turkish history of economy for 50 years, has been negatively affected by the economic reforms took as part of the privatization process in Turkey, and had to close its factories.  Sümerbank, whom led the daily life, material culture, and fashion with part of its manufactures, has left behind a historical fabric archive today which turned into industrial waste. Following the privatization process starting from 1987, many factories such as ‘Izmir Halkapınar Basma Sanayii Müessesesi’ (Chintz Establishment) has been closed, and some have been transferred to various sector establishments, municipalities, and universities, and many of the fabrics and the machinery in those factories fell apart and became useless.

In 2006, Izmir University of Economics, Faculty of Fine Arts and Design, with a special permit from Izmir Special Provincial Directorate of Administration, cleaned up and archived the obsolete fabrics and fabric catalogues of Sümerbank’s Izmir Halkapınar Facilities to be used as educational tool. The main purpose here was to allow use of these fabrics in the light of academic and scientific preservation rules, and share them with researchers, designers, and respective institutions worldwide and in Turkey as part of a cultural capital, and raise awareness on knowledge generation and research on this issue, and create a value that will be owned by Turkish textile and fashion sector as well.

Izmir University of Economics, Department of Fashion and Textile Design will preserve the textile patterns designed in Sümerbank’s  Halkapınar Basma Sanayii Müessesesi between the years of 1956-2001, turn them into a digital museum, and establish a pattern archive allowing access to national and international platform with the support of Izmir Development Agency. Aegean Exporters' Association also supports many of the activities as part of the project.

The pattern archive, dating back to 1956, includes figures reflecting the spirit of the age in addition to many patterns such as striped, flora, etc. that became the signature work of Sümerbank.  In addition to the pattern catalogues, there are also many materials such as the outfits of the era; Sümerbank manufactured porcelains, notebooks, diaries, and objects used by factory workers onsite. Crowded members of project team, who are working diligently, include but not limited to Prof. Dr. Ender Yazgan Bulgun, Prof. Elvan Özkavruk Adanır, Asst. Prof. F.Dilek Himam Er, Yıldız Berrak Sarı, Nur Ceren Kurt, and Zülal Sevinçler.

Documenting, preserving, restoring, and enhancing the textile archive of Sümerbank, the leading institution of Turkish textile history, and establishing a digital textile archive and a database so that researchers and designers can efficiently use this archive, is the ultimate goal of the project. An interactive exhibition for public underlining the importance of Sümerbank culture in terms of Turkish fashion and textile history will be held; and activities such as workshops, exhibitions, seminars, etc. will be organized to carry the project to scientific platform and promote its visibility and sustainability in international arenas.