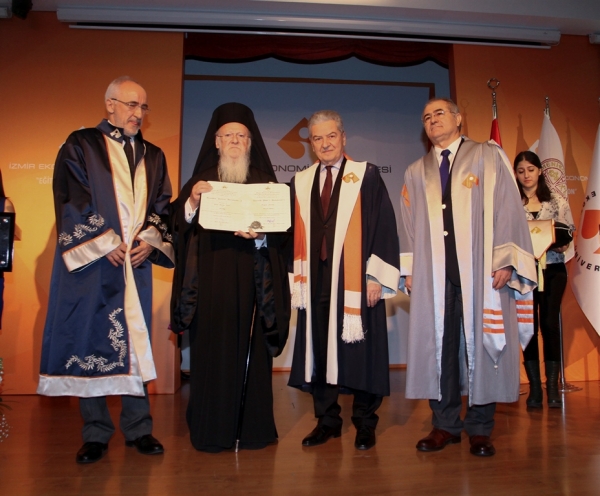 Ecumenical Patriarch Bartholomew I, the  Orthodox Patriarch of the Phanar, was awarded the degree of “Doctor Honoris Causa (Dr.hc)” in “Sociology” by the Senate of Izmir University of Economics for his contributions and service to society and humanity; and for improving inter-faith dialogue.

President Ekrem Demirtaş said, “His All-Holiness Ecumenical Patriarch Bartholomew I, who accepted our Honorary Doctorate degree, is a highly important persona. He is not only the spiritual leader to some 300 million Orthodox Christians world-wide, but a world leader working to establish inter-faith dialogues, human rights, and world peace.”

Pesident Demirtaş stated that inter-religious and inter-cultural dialogues were needed more than ever, and that we had to work harder to achieve the world peace. Demirtaş said, “Under no circumstances can the wars, crimes in the name of religions be accepted. Faiths need to spread love and peace, not plant the seeds of hostility. No religion commands killing, or making war. Therefore, we need to understand and respect the faiths of others as well as ours. And this is certainly possible through dialogue.”

Demirtaş indicated that conflicts and wars come into the picture when dialogues cease to exist. He said, “War crafts are still doing dog fights over the beautiful Aegean, where only passenger planes and seagulls should be flying over.”

IUE Rector Prof. Dr. Oğuz Esen pointed that the honor was proposed by the Faculty of Arts and Sciences for Bartholomew’s contributions and service to society and humanity; and for improving inter-faith dialogue, and that the proposal was accepted by the University Senate. Prof. Dr. Esen stated that religious and ethnic conflicts worldwide increased rapidly, and he said, “Turkey, just like other nations in diverse parts of the world, suffers from inter-religious and inter-ethnic intolerance and lack of dialogue. And as a University, we have been trying our best to stand against this dangerous tendency. Izmir University of Economics, founded on the cosmopolitan heritage of Smyrna, has been promoting principles of a democratic and multi-cultural society, since its origin.”

Ecumenical Patriarch Bartholomew I, who has been awarded the honorary doctorate degree for the second time in Turkey, said that it was a unique pleasure and a great privilege to receive the degree, and he delivered a conference titled, “BUILDING BRIDGES: Interfaith Dialogue, Peace - Making and Ecological Awareness”.  Bartholomew said, “You are an institution dedicated to preserving and promoting the legacy of the foremost statesman and First president of the Republic of Turkey, Kemal Atatürk. We therefore express our wholehearted gratitude to the administration of this university, school's administration, faculty and students.”

Bartholomew, who stated that they worked to build bridges between diverse faiths, cultures and peoples, said the following:
“Our world is in crisis, indeed. Some people have strong convictions that they would rather sacrifice their lives than change their views. Others -we might say fundamentalists-are unfortunately even willing to take the lives of innocent victims to defend these views. This is why we are obliged to listen more carefully, to "look at one another" more deeply "in the eyes."

‘Peace is not impossible’

Bartholomew stated that this century must become an era of fraternity and solidarity; however, that would not be achieved without the contribution of religion. Bartholomew, who reported that dialogue was the antidote to fundamentalism, said that peace was not impossible.

Ended His Speech by His Blessings

He also addressed the students and academicians in the conference hall by saying:

“Dear students of the Izmir University of Economics: Looking into your eyes means drawing encouragement, inspiration and hope for a bright future. Distinguished Professors: Your sacred task is to transmit to your students the spirit of openness. We remain thankful for this encounter and express once again our gratitude to your University for the exceptional award and the invitation to address you today. And God bless you!”