THE BRITISH LEARNED ABOUT TURKISH TEXTILE 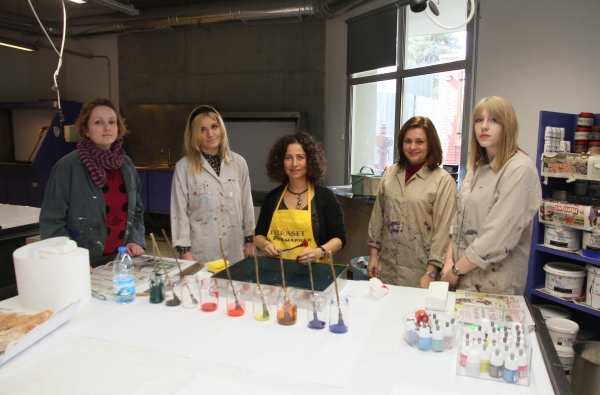 British students learned about Turkish textile first hand and got acquainted with one of the oldest Turkish paper marbling art called “ebru”. Lecturers and students of IUE Department of Fashion and Textile Design, who won the “FEED – IN Educational Collaborations Competition” organized by British Council and partnered with De Monfort University (England), started their studies. Turkish and British fashion students paid visits to each other’s countries and followed the recent developments in textile industry, and cultural components together.

Prof. Dr. Elvan Özkavruk Adanır, Head of IUE Department of Fashion and Textile Design, stated that as a result of the competition the students of both countries observed the textile companies they designated, and created joint collections based on their studies. Prof. Dr. Adanır said, “The British Council decided to support the fashion and textile departments through this competition. Our students conducted brand analysis with the support they received. Likewise, the British students conducted brand analysis in their own countries. Some of the elected students paid mutual visits and made observations for one week. British students who visited Turkey learned about both local arts and textile sector.”
Prof. Dr. Adanır stated that British students were impressed with the progress in Turkish textile and the training that took place at Izmir University of Economics.

Asst. Prof. Dr. Ebru Corsini, Lecturer at IUE Department of Fashion and Textile Design briefed the British students about ebru and they tried ebru together on paper and fabric.