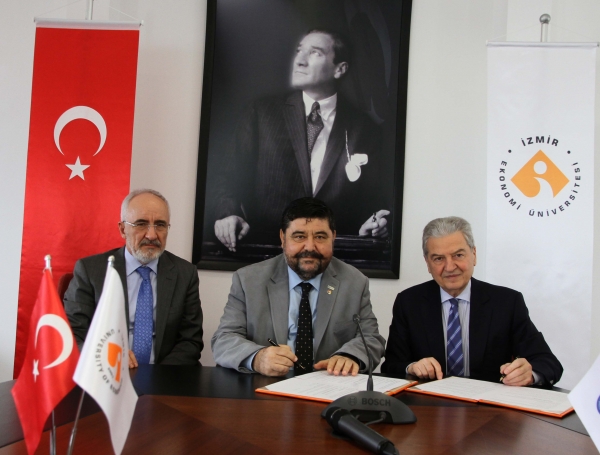 First degree blood relatives of members of Bodrum Chamber of Commerce qualified for 15% discount in annual tuition fees of Izmir University of Economics as part of the protocol which was signed at IUE Board of Trustees Hall. Along with Demirtaş and Kocadon, IUE Rector Prof. Dr. Oğuz Esen, İbrahim Akkaya, Vice Chairman of BTO Executive Board, İlhan Ersan, Council President of BTO, and Prof. Dr. Fuat Önder, Secretary General of BTO attended the ceremony.

President Ekrem Demirtaş stated that Bodrum was a brand city and he said, “Our children who receive training in English and graduate with two foreign languages will carry Bodrum a step further. We have more than hundreds of students from Bodrum studying at the University. Bodrum Chamber of Commerce is an extraordinary chamber, and we want to support them through our educational opportunities.”   Demirtaş, who mentioned that he was from Muğla and grew up at town very close to Bodrum, said that they aimed to train qualified graduates who can foresee the future.

Chairman Mahmut Kocadon pointed that sending students to school was a long term investment, and the protocol helped them build the future of Bodrum youth. Following the signing of the protocol Kocadon said, “Two Muğla citizens are shaking hands in Izmir for the education of youth. This protocol is very meaningful.” IUE Rector Prof. Dr. Oğuz Esen reported that they aimed to contribute to socio-economic progress of Bodrum through the protocol.