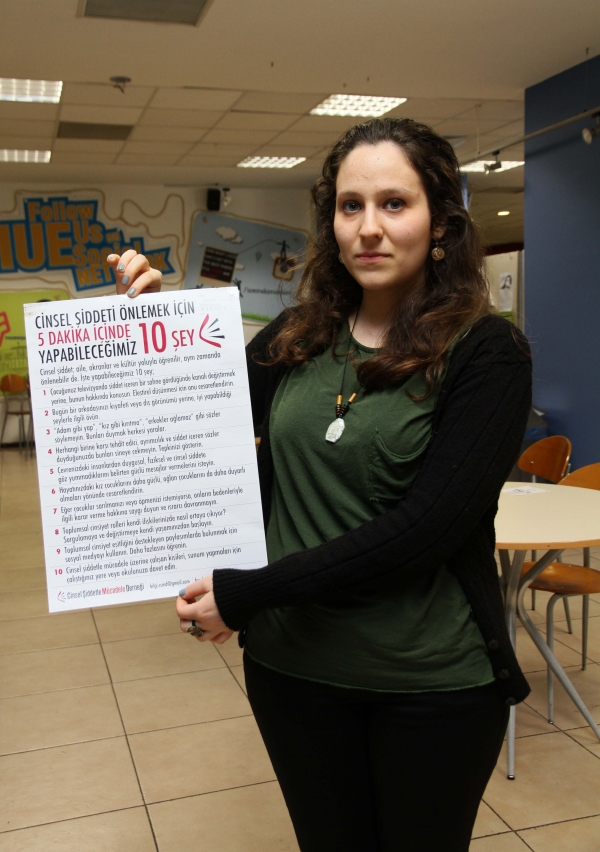 University students teamed up against violence against women. Students, who wanted to draw attention to the increasing cases of violence against women recently, try to both defend themselves and raise awareness about the issue. Students of Izmir University of Economics (IUE) are running a self-awareness campaign titled, “10 Things You Can Do in 10 Minutes to Prevent Sexual Violence”. Female students are also learning the art of defense thanks to IUE Far East Sports Club.

Student Cansu Sönmez, member of IUE Equal Platform Club, stated that they were working together with the Association for Fight against Sexual Violence. Sönmez said, “International Working Women's Day on March 8 is approaching. We are against all kinds of violence. It is a deep-rooted issue stemming from childhood. Today’s youth will be future parents. We speak unintentionally. We use words of violence. We need to become aware of this and act accordingly”.

Their banner was also welcomed by the students, mentioned Sönmez and she said that sparing only 5 minutes would change many lives. Sönmez stated that the banner included the following information:

“Sexual violence is learned through family, peers, and culture, but it is also preventable. Instead of changing the TV channel when you come across a sexual violence scene, talk about it with your children. Encourage them for critical thinking. Praise your friend not for his /her clothes or looks but for something they did well. Do not ever use phrases such as ‘Do it like a man’, ‘don’t walk like a sissy’, or ‘men don’t cry’. Hearing these hurts everyone. Don’t put up with words that include threats, discrimination, and violence. Show your reaction. Ask those, who are subject to emotional, physical, and sexual violence, to give strong messages. Encourage the girls to be stronger, and boys to be more sensitive. If children do not want to be hugged or kissed, respect their decision and do not be insistent. How does gender role play in your own relationship? Start questioning and changing with your own life. Use social media to share posts that support gender equality. Learn more about it. Invite people who work against sexual violence to your workplace or school to make presentations, or give briefing.”

‘Great Interest to Art of Defense’

Aytaç Dayanç, The Founder and Honorary President of IUE Far East Sports Club, stated that females students started to pay more interest lately to the combat sports, and they both exercised and learned to defend themselves at the same time. Boxing, kick boxing, and self-defense training were the most wanted training among females, said Dayanç. “We started classes for females due to the increasing cases of violence. They learn to defend themselves in addition to doing exercise. Combined training is in demand. They get Boxing, kick boxing, and self-defense training. Self-defense training includes Aikido, Judo, and Wing-Chun sports.”