OZGECAN’S NAME WILL LIVE ON 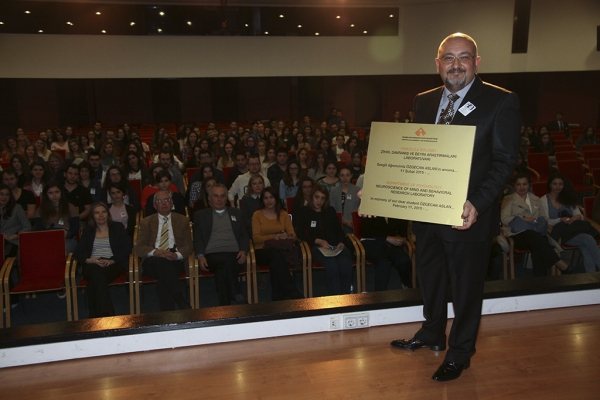 Özgecan Aslan’s name will live on at Izmir University of Economics (IUE) Department of Psychology. IUE Department of Psychology, Neuroscience of Mind and Behavioral Research Laboratory is named after Özgecan to honor her memory.
IUE lecturers and students discussed the violence against women at the memorial ceremony that took place at the Conference Hall. They pointed out the fact that violence against women increased day by day, and that they wanted Özgecan’s name to be known by future generations.

‘This Problem Belongs to All of Us’

Simge Tekin, a Junior at IUE Department of Psychology, who delivered a speech on behalf of the entire students of the department, stated that Turkey got drowned in murder, rape, and abuse news. She said, “We all witness that being a woman itself is the cause for a murder today. A young psychology student full of life, our future colleague, feared for her life in this country and carried a pepper spray with her who nonetheless got murdered brutally and was deprived of her right to education, a happy life, her ideals, and loved ones. This incident not only deeply saddened her family and friends, but us, who have never met her, as well. This is a social problem. This problem belongs to all of us’”.

Tekin reported that there was an increase, which was not isolated, in women murders and violence against them due to wrong policies and discourses which trivializes women. Tekin said that there were political discourses based on the way women dressed, their chastity, their disposition. She said that they condemned all kinds of mentalities which tried to legalize and justify violence and abuse against women, and made the offender seemed like the victim instead. “We invite the media and the universities, in the name of mind, humanity, goodness, and constructiveness, to join in our fight against making women subject to the fear, violence, abuse, and murder, and make them become disadvantaged in the society. We are extremely proud to have named our Neuroscience of Mind and Behavioral Research Laboratory after the beautiful Özgecan, who was a freshman in psychology, so she can shed light on to young science lovers,” said Tekin.

Gizem Naz, President of IUE Psychology Club, reported that 16 women were murdered during the month of February, and four of those incidents took place in Izmir. Naz stated the following:

“While 13% of women were murdered because they wanted a divorce or a separation, 94% of them got murdered because they wanted to make a decision about their own lives. It was stated that those women, except for one-cause for murder was not identified-got killed by their husbands while standing out for their own decisions. Likewise, in 94 % of the murders, the killer was someone very close to the victim. Of those women, 9 were killed by their husbands or ex-husbands, 2 by their boyfriends, 2 by their fathers, and 1 by their son. And our sister, our friend, our colleague Özgecan Aslan got killed by person(s) unknown to her.”