YOUTH IS AT THE THEATER FEST 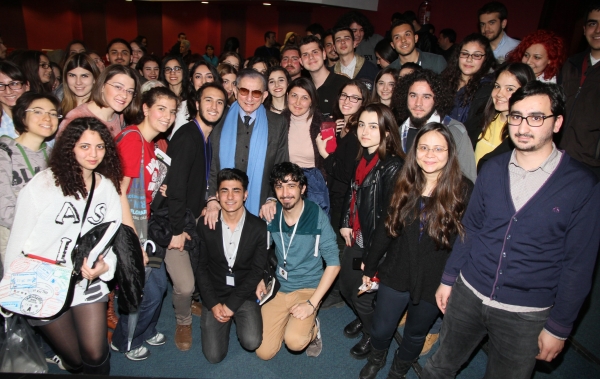 The university youth is getting together at the 1st Rabarba Theater Festival. Theater groups of IUE, Dokuz Eylül University School of Medicine, and Physical Therapy, Ege University School of Medicine, Faculty of Economics and Administrative Sciences, Yaşar, Izmir, and Kâtip Çelebi Universities came together at the first festival hosted by Izmir University of Economics.  Actor and Director Haldun Dormen, the first guest of the festival who shared his experiences with the audience, said, “Work as much as you can like me, then you won’t find time to get old.”

Dormen, who addressed the audience at IUE Conference Hall, stated that nobody in his family was interested in fine arts, but he was born as an actor. He said, “I wanted to be involved in the show business. My father was a very open-minded man. It was such a big issue for a businessman to allow his son to become a theater actor in the 50’s. He supported me but he wanted me to be ‘the best’. Dormen pointed that the Turkish theater, despite all the pressure, was in good situation. He said that there were 300 alternative theaters in Istanbul, and thinking that criticizing the actors with no educational background would mean belittling the Turkish theater. He said that it would mean excluding esteemed actors and actresses such as Adile Naşit, Münir Özkul.

Dormen reported that the Dormen Theater made its mark in history and became a legend, and that period was over now. “Nothing could affect theaters. It would come to life on its own even if they wanted to close it. Both the state and privately owned theaters need improvement. Some of the actors don’t get a role for years, some do dubbing. Some act in numerous plays. It is like a murder to close theater or opera. Nothing would happen to Izmir and Ataturk.”

‘Watch Out for Technology Dependency’

Dormen said that he enjoyed playing in TV series and he would be willing act in high quality productions if he was asked. He said that sauciness was such an undesirable thing in the profession, and said that one’s focus on a profession should be like ‘to be or to be’. “You cannot both be a lawyer and a theater actor at the same time. Choose one profession but be very good at it. Always be modest and humble. I don’t know how people managed not to be modest. Technology messed up our social lives. I am definitely against technology getting into the theater that much. Setting and lighting does not work then,” said Dormen.

Many Esteemed Actors Will Be Visiting

The festival will host Orhan Aydın at 12.00 and Mehmet Vanlıoğlu at 13.30 as guests on Thursday, March 26. On March 27, on World Theatre Day, Asuman Dabak at 13.00, Canan Ergüder at 14.30, and Müjdat Gezen at 17.30 will make guest appearances. The festival will come to an end with IUE Theater Club’s play ‘Don Cristobita ile Dona Rosita’nın Acıklı Güldürüsü’.