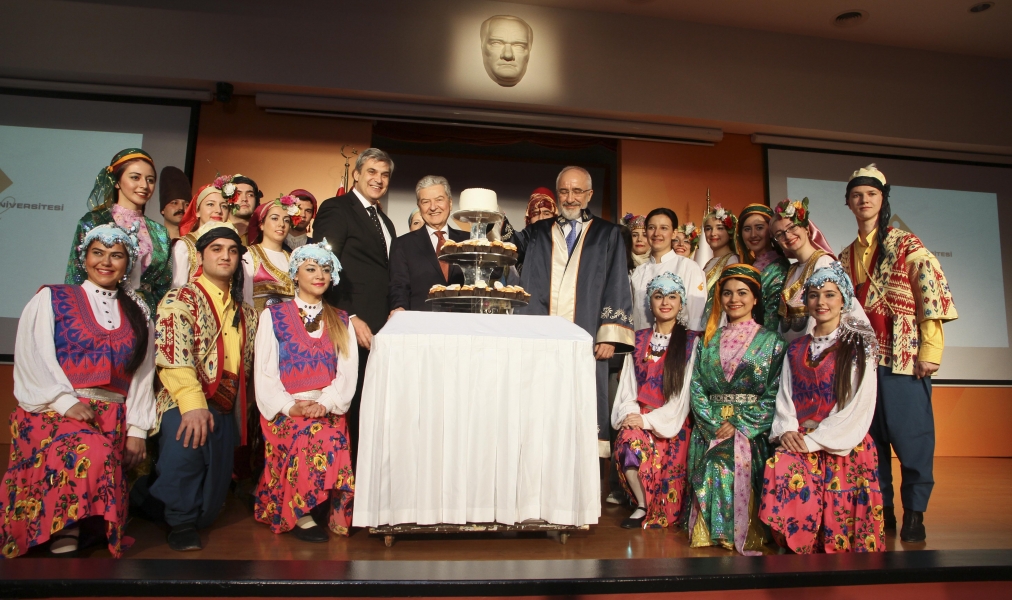 Students of Izmir University of Economics (IUE) will receive training with ‘Smart Campus’. The $3 million investment allows students to attend classes online.
Ekrem Demirtaş, President of IUE Board of Trustees, tried out the system for the first time during his speech at the Ceremony for the 14th Anniversary of the Establishment. President Demirtaş attended the class online and shared the ‘Smart Campus’ application with the guests which will be used in all classrooms in 2015 – 2016 academic year. Tuğçe Alp, the presenter of the program, made an excuse to the teacher and said that she would watch the video recording of the class later on.
The 14th Anniversary of the Establishment of Izmir University of Economics was celebrated with a glorious ceremony at IUE Conference Hall. Ekrem Demirtaş, President of IUE Board of Trustees, Prof. Dr. Oğuz Esen, Rector of IUE, Celal Kocabaş, Izmir Regional Courts of Justice, High Court Chief Prosecutor, Celal Uzunkaya, Provincial Police Chief of Izmir, Serpil Alpman, Izmir Representative of Ministry of Foreign Affairs, Geza Dologh, President of the Assembly of Chamber of Marine Commerce, Zeliha Toprak, Izmir Honorary Consulate of France, Filiz Eczacıbaşı Sarper, Chairwoman of the Executive Board of IKSEV (Izmir Foundation for Culture, Arts, and Education), Aysel Öztezel, President of Board of Women Entrepreneurs of TOBB Izmir, Asuman Nardalı, President of the Council of ITO Businesswomen, academicians, guests, and many students attended the ceremony.
The First Smart Campus in Turkey is at IUE
7 thousand 500 students studied at Balçova campus, and the investments would continue, stated Demirtaş. "Our physical infrastructure is excellent, and we are almost done with the School of Foreign Languages building. Next on our agenda is the main building; we will be remodeling and renovating that as well. We will be establishing parking lot and sports field in the western part of the campus with the co-operation of Balçova Municipality. Health Campus will be built on the recently purchased lot. These are pleasant and significant developments. But physical infrastructure is not all that is. Now, with a $3 million investment, we are turning Balçova Campus into 'Smart Campus'. All of the classes will be 'smart class' as of 2015-2016 academic year. This way, students will be able to enter the system with their passwords, and follow the classes they missed. No other university in Turkey has this system yet. And only a few number of universities worldwide use it at the moment,” said Demirtaş.
‘Güzelbahçe Campus will become a Technology Valley’
Demirtaş also mentioned that IUE Science and Technology Campus in Güzelbahçe, will be put into service section by section in 2016 - 2017 academic year. He said, "There will be engineering faculties, Techno Park, science and technology based Ekonomi School (K-12), which will be offering education in 3 languages, and social and sports facilities on this campus. Güzelbahçe Campus will be a ‘Technology Valley' to the core. Plasma Studio, known for building university campuses on many locations around the world, started to develop a master plan already."
President Demirtaş stated that nobody put in a dime for all of this; however, it didn’t mean that they did not want any support, that they would welcome any support from R&D and technologies, TUBITAK, to contribute to development goal of Turkey.   Demirtaş said that they completed the Science Park located at ITOB Organized Industrial Zone, Tekeli, and that they would start knowledge and technology production. He said that they trained graduates who would build the future world, and they followed their goals straight and never strayed from Ataturk’s path.
Good News about New Departments
IUE Rector Prof. Dr. Oğuz Esen stated that the University had 33 professors, 38 associate professors, and 88 assistant professors, total of 436 full-time academic personnel in its 14th year. Prof. Dr. Esen said that the University placed significant importance on education and research since its establishment, and developed many projects to provide solutions to many problems of the city. He also announced that two new departments would start enrolling students. “We will enroll students at Mechanical and Materials Engineering, and Mechatronics Engineering. We are offering Electrical and Electronics Ph.D. Program, Electrical and Electronics Master Program, Computer Engineering Master Program, and Occupational Health and Safety Master Program. We will be creating the biggest eco system of Izmir with the Technopark-Sciencepark, which will be put into service in the coming days, and the Technology Transfer Office, which we worked very hard to make it institutionalized.”   Gabriel Charles Nije, EXPO student at Department of Computer Engineering from Gambia and Elene Murvanidze, EXPO student at Department of Economics from Georgia talked about their education experiences at IUE.
Following the speeches, “Izmir: Rediscover Life”, a promotional video on Izmir prepared in 10 languages by the Faculty of Communication for Izmir Chamber of Commerce, was presented. Academicians and students of Faculty of Communication who took part in the film production were awarded plaques. Also receiving awards were the students who ranked in the Gastronomy Contest among High School Students, and IUE 11th International Student Conference. Academic Appointment/Promotion Ceremony took place, and plaques were awarded. IUE Folk Dances Club presented the cultural enrichment all over Turkey with their "Evliya Çelebi" performance.  The club presented President Demirtaş, Izmir route of Evliya Çelebi printed on a fabric as a gift in memory of the 14th year. President Demirtaş, Rector Prof. Dr. Esen, and Rebii Akdurak, Chairman of the Council of Izmir Chamber of Commerce, cut the cake, baked by Department of Culinary Arts and Management Student Chefs, together with the students. The ceremony ended with a reception that took place at IUE Festival Field. 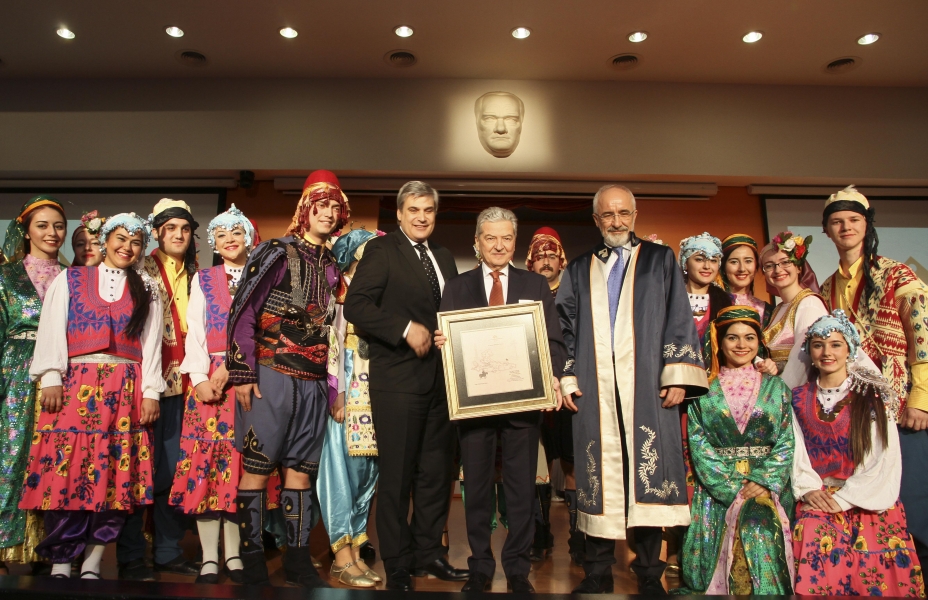 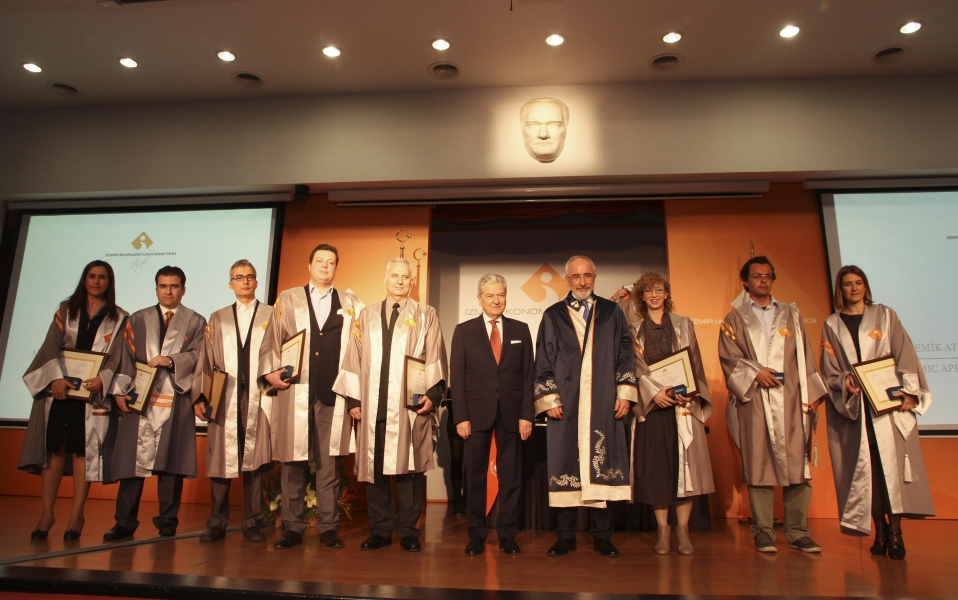 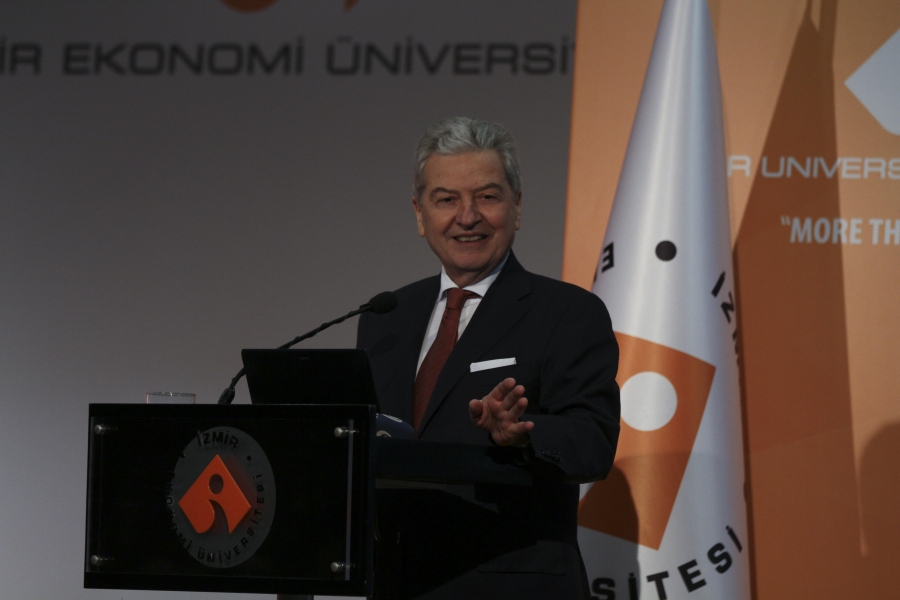