‘TURKEY SHOULD CONSIDER REFORM FOR GROWTH’ 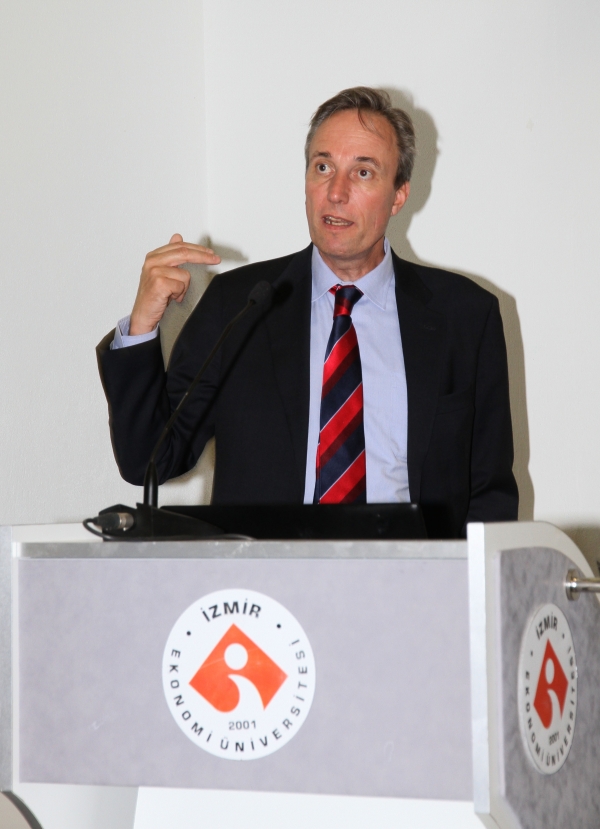 Dr. Martin Raiser, Country Director for Turkey of the World Bank, stated that the Turkish economic growth has come down to a modest 3-4% range, and in order to sustain growth, Turkey needed to boost savings and level of schooling, and boost female employment.
Raiser, who has been invited by Izmir University of Economics, Department of Economics, introduced the report titled, ‘Turkey’s Transition’, prepared by the World Bank, and answered questions about Turkish economy. Raiser reported that transition projects implemented in Turkey set an example to many countries worldwide, and the increase in productivity was of vital importance in the economic growth of the country. “Turkey needs to shift its source of productivity increase from structural change such as transition from agriculture to industry and services, and rapid urbanism to innovation. Turkey needs to benefit from the demographic window of opportunity as well. A demographic window of opportunity has been opened for Turkey in 2005. Two thirds of its population is a working population, and rate of dependency has decreased. This window of opportunity will stay around for another ten years. This period should be used efficiently, and the young population need to be well educated and equipped starting from pre-school level,” said Dr. Raiser.
‘Education is on top of the list in the future of Turkey’
Dr. Raiser reported that average level of education was less than 7 years in the majority of the workforce, and that needed to be raised up to 11 years as quick as possible, which was a standard in developed countries. Dr. Raiser recommended that primary policy should be to focus on education, and quality of education was just as important as the level of schooling. He said that Turkey needed to focus on the relation between education and the needs of labor market. Dr. Raiser also emphasized the significance of university education in female employment.