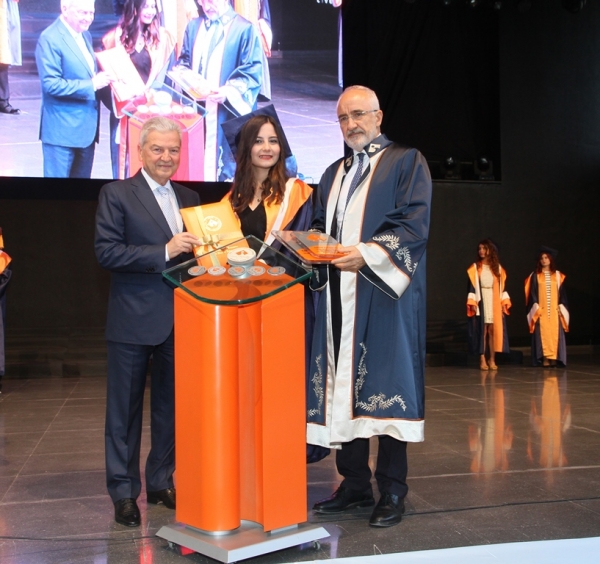 2015 graduates of Izmir University of Economics (IUE) took their first steps into the business life. 829 young individuals who completed their education successfully in 2014 – 2015 Academic Year, received their diplomas at the ceremony that took place at IUE Amphitheatre. At the end of the ceremony, the graduates proudly threw their caps into the air as they sang the 10th Year Anthem.
Cem Kartalcan, graduate of Department of Mathematics, who is unable to move his body, got up from his wheelchair and received a big round of applause from the audience in the ceremony. The youngest graduate was 3 year old Pars Heris, son of Melis Heris from Department of Psychology.
Emine Aydındoğlu, top student of the University who graduated from Department of Translation and Interpretation, attached a star on the commemorative symbolic log with President Demirtaş and IUE Rector Prof. Dr. Oğuz Esen at the ceremony.  Audrey Mariannick Yameogo (Department of Economics) and Eren Beksal Bektaş (Department of International Trade and Finance) respectively the second highest and third highest ranking students, were also presented their diplomas and plaques by Demirtaş and Prof. Dr. Esen. Graduates of Post-graduate Programs, Faculties of Engineering and Computer Sciences, Communication, Arts and Science, and Vocational School, Vocational School of Justice, and Vocational School of Health Sciences were also granted their diplomas at the ceremony. Aydın Özcan, President of Izmir Bar Association, Erhan Atlı, President of the 11th High Court, Members of the Board of Trustees, and many guests have attended the ceremony.
‘IUE is entrusted with the Graduates’
President Demirtaş, in his speech, stated that they produced 826 graduates, and he said, “Our students received the best quality of education. They are graduates of Izmir University of Economics which ranked in the first 10 among 200 universities, and it is one of the first 500 universities worldwide. The quality of our graduates comes to light. We want them to have self-confidence. Let them have their economic freedom so they can be worthy of you, their country, and our founder of the Republic, Ataturk.” President Demirtaş stated that that started to get graduates as a member of the Board of Trustees for the first time this year, and said that the Board, after a while would be composed of graduates. “We do not cut ties with them when they graduate. This university belongs to them. In time, they will be in charge of the University and the president of the board of trustees will be one of the graduates. We will be entrusting the university with them. They will be serving this country as the soldiers of Mustafa Kemal,” said President Demirtaş.
‘Self-Confident Graduates’
IUE Rector Prof. Dr. Oğuz Esen indicated that they produced more than 9 thousand graduates stretching all the way from Australia to Canada in different parts of the world. He said, “Our graduates provide significant services to global community with a big self-confidence. Producing self-confident graduates who are proud of their university is the biggest accomplishment of a good university. Self-confidence, without a doubt, is the most important characteristics of our graduates. An approach that hears out its students since from the establishment, and participative, free, tolerant atmosphere both in and out of the classroom is at the heart of that.”
‘Quality of Education’
Cengiz Ülken, Chairman of the IUE Alumni Association, stated that the graduates would be making a difference with the quality of their education both in national and international business world. Top student Emine Aydınoğlu pointed out that the key to success was doing the job someone enjoyed, and she, herself, would be doing translation and interpretation with great admiration.