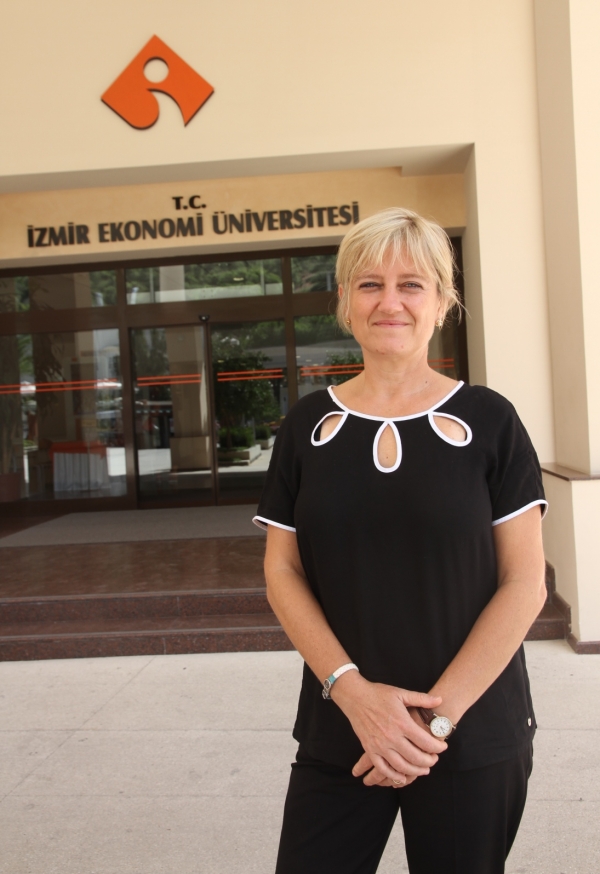 Asst. Prof. Dr. Esra Katıman, Lecturer, IUE Faculty of Law, reported that 28 EU countries, which convened upon European Commission’s urgent call on September 14 in order to discuss the refugee crisis, could not reach an agreement on how to relocate 120 thousand Syrian refugees. Asst. Prof. Dr. Esra Katıman commentated on the ‘drama of humanity’ the Syrian refugees are facing after fleeing from their war- torn countries and trying to set up new lives. Katıman stated that European Union needed to increase measures initially, and make ‘right to live’-a universal principle, priority by leaving the national immigration law aside, and find solutions.
Katıman pointed that Turkey was right in the middle of immigrant traffic, and 350 thousand people tried immigration by sea based on United Nations (UN) data. She said that 4 thousand 272 people died at sea trying to reach Europe in 2014 and 3 thousand 419 of those took place in Mediterranean Coast. Katıman stressed that the deaths took place before the eyes of the whole world. "The fact that these deaths are taking place within the borders of the most prosperous and secure continents of the world is a reason alone to call this a drama of humanity. Turkey, for many, is a transit country. The latest tragedy that took place on our shores was the hot topic of the EU Interior Ministers Extraordinary Council meeting. There is an increased immigration to European countries, however, there is also increased deaths including children and women. This puts pressure on European countries to reevaluate their migration policies. They need to come up with solutions for tens of thousands of war-weary civilians on the Austrian-German border. This solution should not be within their foreign policies that only interests their countries. It should be more than exerting a refugee quota or which EU country should allow how many refugees. Otherwise, no solution would be found for deaths in Mediterranean or at borders because as the war continues the migration continues and will continue,” said Asst. Prof. Dr. Esra Katıman.
‘No Reconciliation, No Solution in EU’
Katıman pointed out that the deaths took place at sea, therefore precautions before and during the travels needed to be taken. She said that 28 EU countries, which convened upon European Commission’s urgent call on September 14 in order to discuss the refugee crisis, could not reach an agreement on how to relocate 120 thousand refugees. Katıman said, "Many topics such as internal quota policies, refugee admissions procedures, authorizing the commission with refugee redistribution, border control-an exception to Germany’s Schengen terms, closing down borders will be pending until the Heads of State and Governments Summit to be proposed by EU Council. Among the agreed topics were enforcing police control in the Mediterranean, and improving refugee record system in Greece and Italy, borders busy with refugees. There was disagreement when it came to quota and relocation of refugees. On the other hand, Hungary closed its borders, and reinforced its Austria and Serbia borders. But preventative measures had to be taken urgently since the boats are sailing every day.”
‘Preventative Measures Are Required’
Katıman stated the following:
"Important part of search and rescue is taking preventative measures before the disaster happens. Preventing people from going aboard on boats that are not safe, and if they already sailed, responding immediately is part of search and rescue. All EU countries which border seas, including Turkey, are responsible for putting an end to deaths in the Mediterranean, not by humanitarian reasons only but legal reasons as well. International Convention on Maritime Search and Rescue (SAR), 1979 states ‘Parties shall ensure that assistance be provided to any person in distress at sea. They shall do so regardless of the nationality or status of such a person or the circumstances in which that person is found’. There are many rules regarding this obligation in international law. The ‘right to live’ should come before the national immigration law. It is important to have control over all the aspects that lead to human trafficking, but the most important thing is to provide solutions through this migration route.”