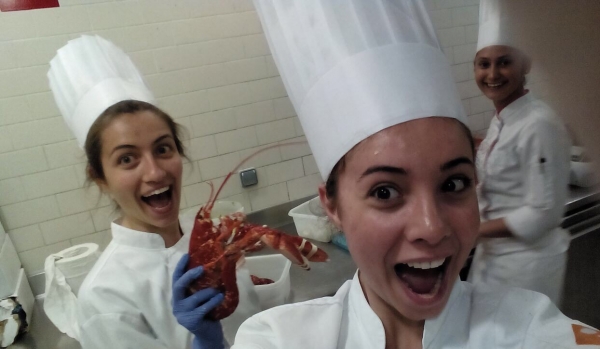 Tables will get enriched by French dishes. Students of Izmir University of Economics (IUE) Department of Culinary Arts and Management are performing their internship in France for 3 months as part of the agreement with Les Toques Blanches Lyonnaises established by world famous chefs of France. 20 IUE prospective chefs are learning the art of cuisine at Michelin Starred restaurants from the world famous chefs in Lyon, France.
Student chefs are performing their internships and receiving training at the same time by gaining international experience thanks to the Collaboration Agreement signed between Ekrem Demirtaş, President of IUE Board of Trustees and Laurent Bouvier, President of Les Toques Blanches Lyonnaises Association at Lyon, France. Sırma Güven, Program Implementation Coordinator of IUE Department of Culinary Arts and Management, said, “Our students are having on-site training on world cuisine and Turkish cuisine. They are performing their 3 month internship with Les Toques Blanches Lyonnaises chefs in Lyon, the capital of gastronomy, and learning experience. This way, they get better at French Cuisine technique and improve their second foreign language skills at the same time.”
‘3 Months in France; Important Investment’
Güven indicated that having an experience abroad supported students in reaching their career goals and contributed greatly to their academic and personal developments. Güven said, “We realize that students come back as individuals with increased awareness of their responsibilities after their internship in France. Time spent there is such an important investment for their careers. We witness new success stories every year as a result of this program for 3 years. We have entrepreneurial graduates who started their own business or work in the leading enterprises worldwide or in Turkey.”