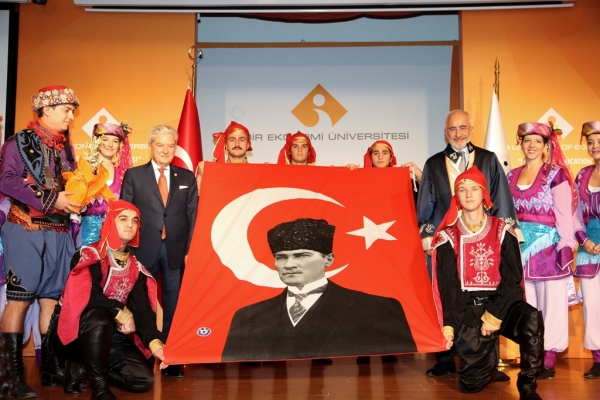 Izmir University of Economics (IUE) is proud to start off 2015 – 2016 Academic Year with its 8 thousand 354 students. The first ceremony of the new academic year started with laying a wreath at Ataturk Monument at IUE Ceremony Field. Ekrem Demirtaş, IUE President of the Board of Trustees, Prof. Dr. Oğuz Esen, IUE Rector, academicians, graduates and students observed a moment of silence. Singing the National Anthem was followed by laying a wreath at Ataturk Monument.

Celal Kocabaş, Izmir Regional Courts of Justice, High Court Chief Prosecutor, Prof. Dr. Cemali Dinçer, Rector of Yaşar University, Attorney Aydın Özcan, President of Izmir Bar Association, Celal Uzunkaya, Provincial Police Chief of Izmir, members of IUE Board of Trustees, guests, academicians, graduates and students attended the second ceremony took place at IUE Conference Hall. The First Lecture was delivered by Asst. Prof. Dr. Alexander BUERGIN, Lecturer at IUE Department of Political Science and International Relations, Faculty of Business, who has been awarded a Jean Monnet Chair by the European Commission.
President Demirtaş, in his opening speech, stated that the University has been involved in many major accomplishments, and produced many successful graduates looking back on 15 years. He said that they still had a lot to do ahead of them. “Our pace is not too bad. We’ve completed the construction of School of Foreign Languages Building. We’ve contracted out the master plan for Güzelbahçe Campus. We will be building the Izmir Economics Private Schools there initially. Last year, we’ve also purchased a 21.000m2-land for 19 million TL which is only 500 meters away from the main campus area. We will be beginning the construction of the “Health Campus” very soon. Faculty of Medicine, Faculty of Health Sciences, and Vocational School of Health Services will start education there next academic year. It is going to be a 2 thousand people campus. We will also be opening a treatment center and a hotel as well. Meanwhile the renewal process for the Dormitory building is still ongoing. We’ve opened up 49 special labs on various fields for a substantial cost, but did not leave anything out. We are talking about a total of 100 Million TL investment here. We will stay as a young university. We will get the youth of computer age ready for the future. We will produce distinctive graduates,” said President Demirtaş.
Demirtaş reported that they’ve also completed Izmir Bilimpark (Izmir Science and Technology Park), the second techno park of Izmir in partnership with Izmir Chamber of Commerce and ITOB Organized Industrial Zone for 18 million TL (received only 1 million grant from the ministry) in which settlements have already started.
‘A Breakthrough in Education Again’
President Demirtaş pointed that they were not a demand absorbing University and said, “We are not interested in handing out scholarships so we can enroll many students. From the very beginning we have been the followed one, not the other way around. Many programs in Turkey started at our University for the first time. Even 100 year-old universities followed our footsteps. We aim for training youth who will build, manage space cities. We’ve bought a land, built a building, and we are not boasting about these, however, I do want to share a pride with you. We transferred all our classes into smart classes. We’ve accomplished something new again in Turkey. Smart class– smart campus is in use now. Lectures are now being recorded and shared. Students log in with their passwords and watch the courses over and over. Students and their teachers can meet online at virtual office hours to discuss and get questions answered. If a student is sick at home, he/she can attend courses online in bed. All classrooms are equipped with interactive projectors, all-in-one PC, microphone, and smart board. We took a step into a personalized digital education with this system.”
'Proud in Every Way'
IUE Rector Prof. Dr. Oğuz Esen reported that the University started the new academic year with 35 undergraduate programs, 28 graduate programs, and 9 doctorate programs at 8 faculties, 2 schools, 3 vocational schools, and 3 graduate schools. Prof. Dr. Esen pointed that the University reached a point to be proud of in every way, and offered its students a free environment to discover and learn new subjects.
'Technology was the Reason'
Barış Sadıç, student who enrolled in IUE Department of Translation and Interpretation with the highest score for 2015-2016 Academic Year, pointed that he preferred IUE because of competent teaching staff, double major options, departments equipped with high technology.
'Future Enlightened by the Past'
At the end of the ceremony, IUE Folk Dances Club and Turkish Art Music Club performed the “Geçmişin Aydınlattığı Gelecek” titled show, written and directed by Engin Kıbrıslı, Member of Board of Trustees of Izmir Chamber of Commerce Education and Health Foundation. After the performance, Ali Eren Aslan, President of Folk Dances Club, presented an olive sapling to President Demirtaş in remembrance of the 15th year.