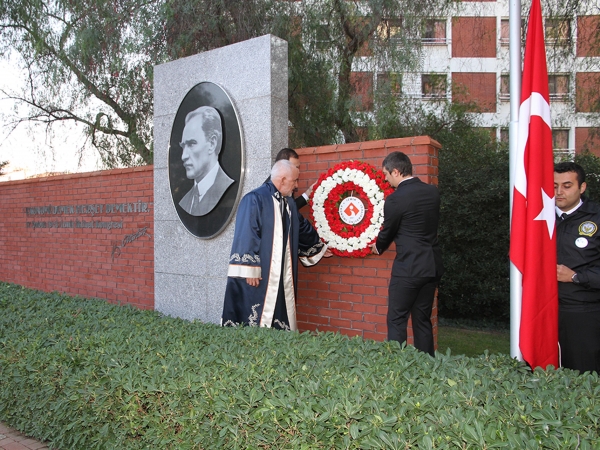 The Great Leader Ataturk was commemorated on his 77th anniversary of death at Izmir University of Economics (IUE) with a large crowd of academicians, administrative staff, and students. Prof. Dr. Oğuz Esen, Rector of IUE, academic and administrative staff, and students attended the emotional ceremony that took place at IUE Ceremony Field. The ceremony started by Rector Prof. Dr. Oğuz Esen laying wreath at Ataturk Monument and as the sirens were heard the attendants observed a moment of silence which was followed by singing of the National Anthem. At the end of the ceremony, academicians and students left carnations at the monument.

Dr. Ozan Arslan, Lecturer at IUE Department of Political Science and International Relations delivered a speech at the ceremony. He stated that what made Ataturk special and unique was his identity as a statesman who built a nation and a state in addition to his military accomplishments, diplomatic intelligence, and his revolutions. Arslan said, “Turkish War of Independence led by Mustafa Kemal Ataturk was a resistance and struggle against Western imperialism. However, it wasn’t an antagonistic approach towards the West, or an attempt to establish a new organization. The West, in his political model, wasn’t merely a location or a direction on the map, but rather a universal style of civilization based on liberal economy in terms of infrastructure, and superiority of human mind instead of dogmas in terms of superstructure.”

Arslan reported that many universities of the Turkish Republic having the same kind of norms as the Western universities do in terms of functionality and scientifically was by courtesy of Ataturk, and that they commemorate with great respect.