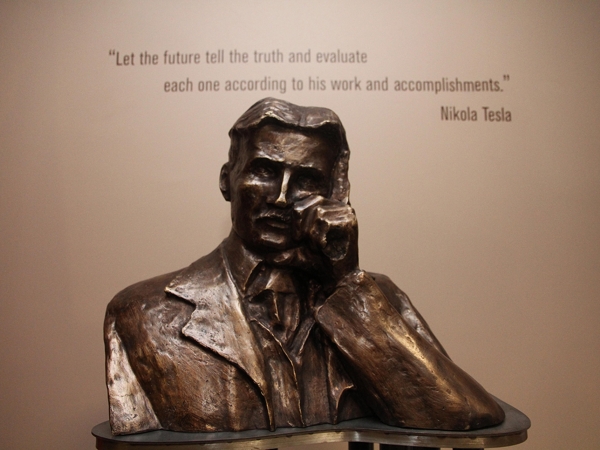 The Tesla Statue, donated to Izmir University of Economics (IUE) by Consulate General of the Republic of Serbia in Istanbul,and USA Tesla Science Foundation, will represent the power of the creative spirit. Known for his many experiments and inventions on electricity, Nikola Teslawill shed light on the world of science.

Ekrem Demirtaş,President of Izmir University of Economics-Board of Trustees,Zoran Markovic, Consul General of the Republic of Serbia in Istanbul,  Milan Knezevic, Director of Tesla Science Foundation, Metin Akdurak,Honorary Consul of the Republic of Serbia in Izmir and Vice President of IUE Board of Trustees, IUE Rector Prof. Dr. Oğuz Esen, Members of IUE Board of Trustees, guests, students, and staff attended the unveiling ceremony of the bust which will be displayed at Izmir University of Economics.

IUE Rector Prof. Dr. Oğuz Esen, in his opening speech, stated that they gathered together to keep the memory of far-sighted scholar alive. The Rector said, “Teslais indispensable part of civilization with his contributions to electricity and science of communication.He is a real world citizen. His works and researches are universal. He is a brave entrepreneur.”

Metin Akdurak, Honorary Consul of the Republic of Serbia in Izmir and Vice President of IUE Board of Trustees reported that the bust was placed at a very busy corner of the University where it would get many visitors.

Zoran Markovic,Consul General of the Republic of Serbia in Istanbul,stated that Tesla was a Serbian born world citizen. He said, “Tesla used his values and traditions of his homeland in his work, inventions, visionsas he was globalizing and presented them at the disposal of whole world. I strongly believe your students will be inspired by the work of Nikola Tesla. His ideas and inventions are not limited with time, nation, religion, language, or race. His work proved otherwise. He deserves immortality and undying respect withthis aspect.”

Milan Knezevic,Director of Tesla Science Foundation, stated that Tesla managed to connect people together by means of electricity. The unveiling ceremony of the bust took place following the speeches with a crowd of guests and students.

WHO IS NIKOLA TESLA?

. Nikola Tesla was a Serbian-American inventor, physicist, and electro-physics specialist born on July 10, 1856 and died on January 7, 1943.

.He had almost three hundred patents for his inventions in many countries for wide variety of subjects including electric motors, remote controllers, electricity generation, x-ray, etc. He has served humanity with almost 700 different products.

. He is also known as “The Man Who Invented the 20th Century”.