ENTREPRENEURSHIP FLAG IS AT IZMIR UNIVERSITY OF ECONOMICS FOR THE 2ND TIME! 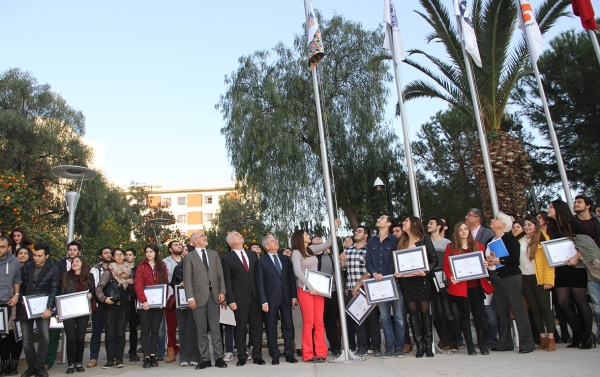 Izmir University of Economics (IUE) has raised the “Entrepreneurship Flag” up to the flagpole for the 2nd time. IUE has qualified to have the new “Entrepreneurship Flag” in the “Bu Gençlikte İş Var” titled competition organized by Turkish Industry and Business Association (TUSIAD) for the most number of enterprising projects with its 299 students. IUE has qualified to have the flag in 2013 which was raised on the flagpole for two years.
Sedat Şükrü Ünlütürk, Vice Chairman of Executive Board of TUSIAD, handed over the Entrepreneurship Flag to Ekrem Demirtaş, President of IUE Board of Trustees, Prof. Dr. Oğuz Esen, IUE Rector, and students at the ceremony which took place at the Conference Hall. The flag has been raised up to the flagpole after the ceremony, and 299 students, who made it possible to fly the Entrepreneurship Flag at Izmir University of Economics for the 2nd time, were given their plaques by President Demirtaş, Vice Chairman Sedat Şükrü Ünlütürk, and Rector Prof. Dr. Oğuz Esen.
President Demirtaş stated that he was delighted to experience this achievement, and he said, “This is the happiest day of my life. We’ve worked very hard, made great efforts. We’ve started out as a student-focused institution. Our mission was to train entrepreneurial, innovative students. We’ve believed that our students might be employed somewhere else initially but start up their own businesses eventually. I was the happiest person when were awarded the flag in 2013 for the first time. This is your success. Our University has also ranked 14th among 193 universities in ODTÜ URAP ranking. Having accomplished this success in our 15th year is so valuable.”
‘Progress in Science and Technology’
President Demirtaş reminded that in 2001 in the first opening ceremony he said 'Great journeys begin with small steps’, and stated the following:
“We are among the first 500 universities worldwide in our 15th year. This year we are going to establish department of space sciences; we are switching to robot technology. We want to excel in science and technology. I would like to express my gratitude to our academicians, students, and to TUSIAD. Their contest reveals how entrepreneurial our students are. Dream big, and don’t give up your dreams.”
‘Let Your Imagination Go Wild’
Vice Chairman Sedat Şükrü Ünlütürk stated that he listened to President Demirtaş’s dream about the establishment of Izmir University of Economics before it came real. Ünlütürk said, “Nothing happens unless first a dream. Let your imagination go wild’. We’ve started ‘Bu İşte Gençlik Var’ contest as a pilot project. It developed rapidly and with giant steps. 3 thousand 194 people from universities in all 70 cities across Turkey participated with one thousand 292 projects. It became such an exciting project. We support development, entrepreneurship all the way. Izmir has a 41% young population. The future of our country is based on the entrepreneurship and creativity of our youth.”
Ünlütürk said that this recurring success was not a coincidence, and IUE contributed majorly to the culture of entrepreneurship, and they were going to select the projects that made it to the finals. Ünlütürk congratulated the students for getting the Entrepreneurship Flag for the second time.
‘Recurring Success’
IUE Rector Prof. Dr. Oğuz Esen pointed that no other university qualified to have the Entrepreneurship Flag for the second time. Prof. Dr. Esen said, “Our success is the indicator of the uniqueness of our university in this matter. We are aware that all students have entrepreneurship and innovation potential. We offer this environment for them with our educational approach.”