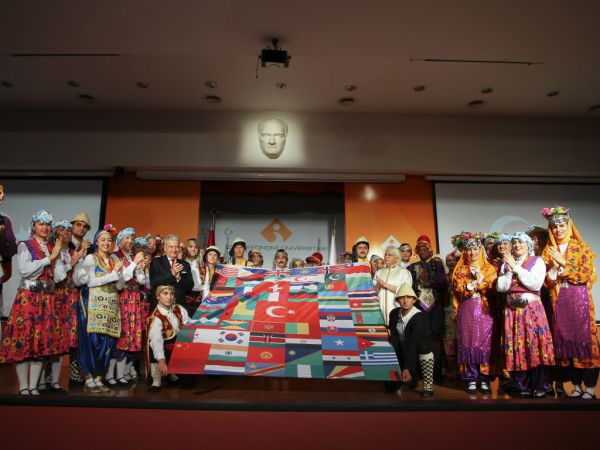 Ekrem Demirtaş, President of IUE Board of Trustees, pointed that the University became a very important brand name in Izmir in a very short time, and he said, "New discoveries and inventions lie ahead of us. Therefore, we will not call it a world university anymore. From now on, Izmir University of Economics is the ‘University of the Future’. We will produce knowledge and technology for humanity.”

Izmir University of Economics, which was established by ITO Education and Health Foundation with the attempts of Izmir Chamber of Commerce (ITO), celebrated its 15th year.  Prof. Dr. Attila Sezgin, Former Rector of IUE (2001-2011), Prof. Dr. Cemali Dinçer, Rector of Yaşar University, Ahmet Berki Dibek, Representative of Ministry of Foreign Affairs, Kemal Baysak, Honorary Consul of Bosnia and Herzegovina in Izmir, Turkey, Members of the Board of Trustees, academicians, students, and administrative staff attended the ceremony at the Conference Hall.

In his speech, President Demirtaş, stated that they were honored to be celebrating the 15th anniversary as an educational institution and a research university. Demirtaş said that when the University was established in 2001, they observed how and where the best education was offered worldwide. "Our mission was to be a student-centered university. We pledged to produce innovative and entrepreneurial graduates, and determined to become a successful world university. And indeed, we reached our targets in a short period of time. We have a total of 80 thousand 600 m2 of facility for education. We also purchased 210 thousand 957 m2 lot in Güzelbahçe for the future of our university. Hopefully, IUE’s Science and Technology Campus will be built there soon,” said the President.

Demirtaş, who reported that they built Izmir Science Park on a 4 thousand 325 m2 lot in 2015, stated the following:

“Building is indeed important but what’s in a building? We turned our classrooms into smart classrooms with a $3 million investment. We aim to increase the success ratio of our students to 95% with this infrastructure. Academicians and students are involved in astonishing accomplishments as we speak. We plan on allocating 10% of the University budget for R&D.”

President Demirtaş said that Faculty of Medicine was established and new departments as Biomedical Engineering, Mechatronics Engineering, Aerospace Engineering, Genetics and Bioengineering, and associate programs such as Footwear Design and Manufacturing, Interior Design, Architectural Restoration, Building Inspection, Laboratory Technology, Furniture & Decoration, Medical Laboratory Techniques, and Electro-neurophysiology. Demirtaş said that they had confidence in generations Y and Z, and they believed a bright future was lying ahead of Turkey who had enough of terror incidents lately.

IUE Rector Prof. Dr. Can Şimga Muğan, stated that they took brand new steps in education, and provided employee mobility. She pointed out that IUE graduates successfully continued their careers over six continents. Prof. Dr. Muğan said that the University produced more than 9 thousand graduates. She said that problem solving depended on innovation, and rising on the spirit of entrepreneurship and basis of research was very significant for the University. Prof. Dr. Muğan told that their goal was to take Izmir Economics to the 22nd century successfully.

İdil Özer Bakır, one of the first students of IUE, stated that she owed rapid and powerful increase in her career to the quality education she received at Izmir University of Economics. Students, who ranked in various contest and competitions, were awarded their certificates of appreciation at the ceremony. Academic Appointment/Promotion Ceremony took place, and plaques were awarded to faculty members by Muğan and Demirtaş.

At the end of the ceremony, IUE Folk Dances Club performed 'Bir Dünyadır Anadolu' titled show, written and directed by Engin Kıbrıslı, Member of Board of Trustees of Izmir Chamber of Commerce Education and Health Foundation, with internationals students. Students made a finale with a giant flag representing the students coming from 56 countries. President Demirtaş and Rector Prof. Dr. Muğan accompanied the students on stage and cut the 15th year cake together.