NEW ACADEMIC YEAR BEGAN WITH ‘ADDRESS TO THE YOUTH’ 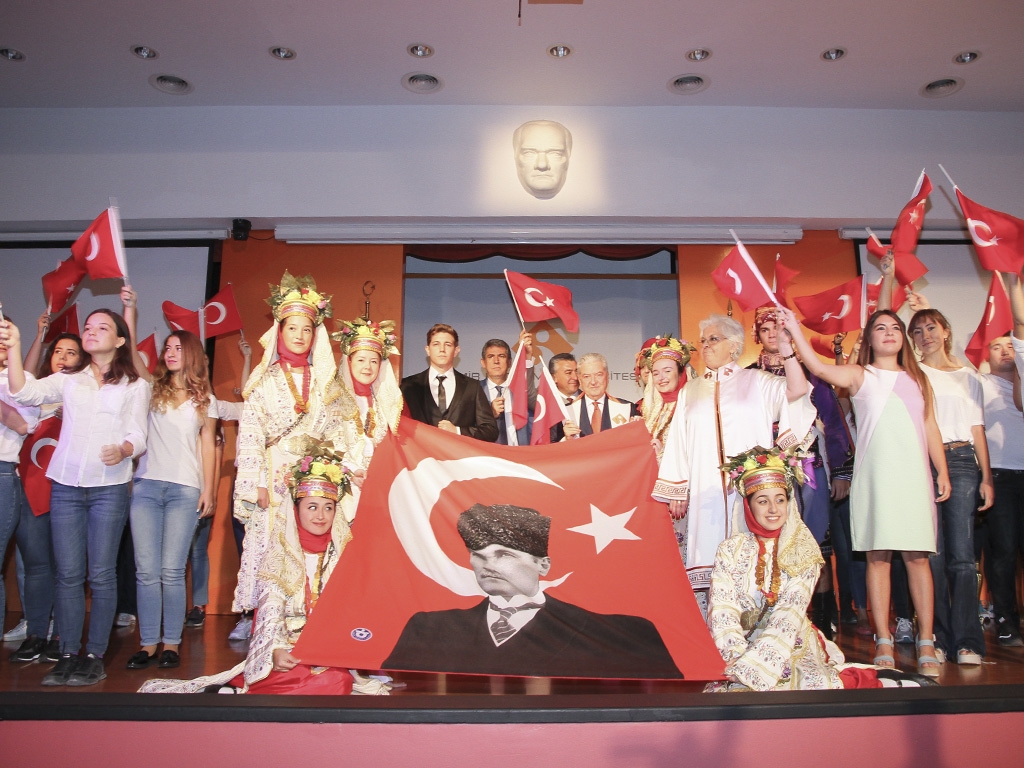 Hundreds of students of Izmir University of Economics (IUE) started the 16th Academic Year by reciting Atatürk's Address to the Youth. The students pledged allegiance to Ataturk. The first ceremony of the new academic year started with laying a wreath at Ataturk Monument at IUE Ceremony Field. Ekrem Demirtaş, IUE President of the Board of Trustees, Prof. Dr. Can Muğan, IUE Rector, academicians, administrative staff, graduates and students observed a moment of silence. Following the National Anthem, President Demirtaş and the Rector laid a wreath at Ataturk Monument.

President Demirtaş, in his opening speech, stated that Turkey followed the modernization path of Mustafa Kemal Ataturk, and he said, “Our primary duty is to train the soldiers of Mustafa Kemal. We need to have peace and stability in our country first and foremost. Turkey gave the whole world a lesson in democracy on July 15. It demonstrated that governments cannot be taken over via coup. It revealed that it is possible only with election”.

The University offered education in economics, engineering, communication, fine arts, and now getting ready to offer education in the field of health, stated Demirtaş and said that they started hiring academicians, started the construction for the hospital, and started graduate programs in health. President Demirtaş stated the following:

“The long and the short of it is we are trying to provide services in education, research, and health for Izmir, for our country all together. Now, we have another goal. We are starting the construction of Güzelbahçe Technology Valley. Master plans are ready. Cases resulted in our favor. There is one more step. The construction of Science College and sports facilities will begin in the beginning of 2017 on our second campus. We will provide the best quality education from kindergarten to university level to children with average and above intelligence. Later, we will move the Faculty of Engineering to that campus.”

President Demirtaş pointed that they would be contributing for Turkey to become a country that produces and exports with the University’s newly opened departments Mechatronics, Biomedical, Aerospace Engineering. “We’ve started education with 2 thousand 105 new students this year. There will also be many guest students from universities that were recently closed. We will do our best to provide them with best quality of education despite the fact that we have limited number of classrooms and laboratories,” said President Demirtaş.

IUE Rector Prof. Dr. Can Muğan indicated that the University trained innovative and entrepreneurial students, and offered education for the future of the country. The Rector said, “We’ve started out with becoming a world university. Our graduates are employed in 36 countries. We want our graduates to work all over the world and have impact over the business world.”

‘We each have a duty’

Engin Kıbrıslı, IUE Graduate (2011) and member of the Executive Board of ITO Health and Education Foundation, reported that 5 years have passed since his graduation, and he had been a member of Izmir University of Economics for 10 years. Kıbrıslı said, “I’ve received a decent education at the University. The University also offered me chance to become the administrator of many clubs and organizations. I’ve noticed that I had a place in international business world after I graduated. I am working at a Japanese based international company. I strongly believe that we each have a duty to take our university forward even though we have graduated.”

‘To make a history…’

At the end of the ceremony, Folk Dances Club put the performance, ‘The Story of a Nation who Made History’ on stage which was co-written and directed by Emel Akçay Uzun, Acting Director of Promotion and Corporate Marketing Communication Directorate, and Engin Kıbrıslı. Also during the performance, hundreds of students recited Atatürk's Address to the Youth. Ali Kartal, President of Folk Dances Club, presented President Demirtaş a plaque with Atatürk's Address to the Youth in remembrance of the 16th year at the end of the performance. 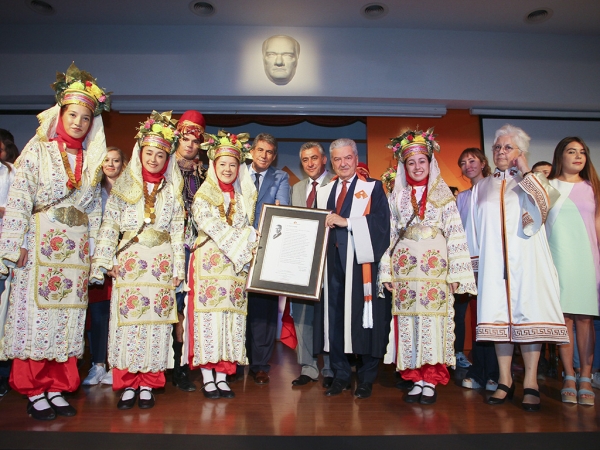