’NAMES OF JULY 15TH MARTYRS IN THE SKY’ 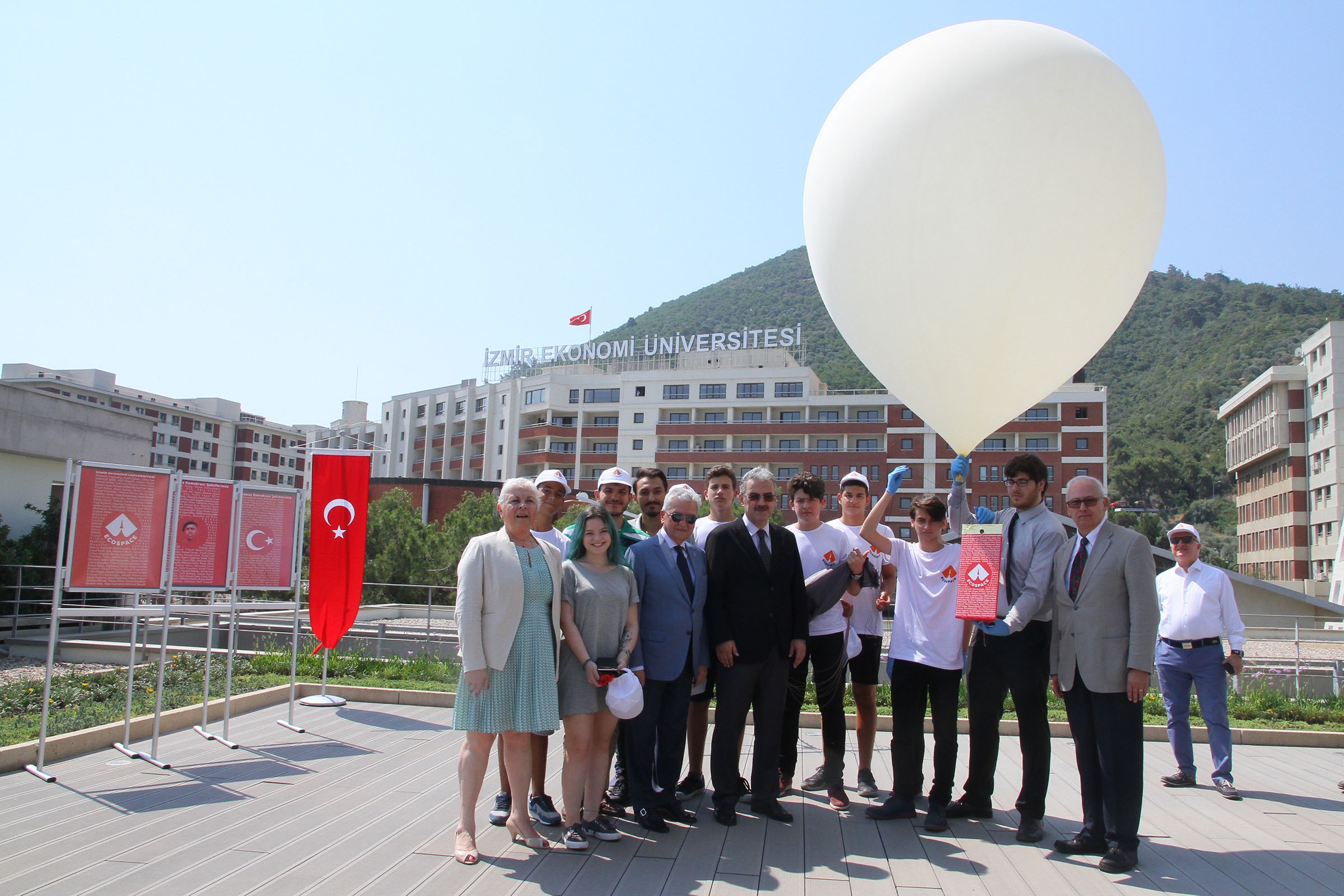 The names of July 15th Martyrs of Democracy were released into the sky with a high altitude balloon developed by students of Izmir University of Economics (IUE). The high altitude balloon, containing the Turkish Flag and the names of martyrs of Democracy, rose into the sky with the participation of Erol Ayyıldız, Governor of Izmir, Ekrem Demirtaş, President of IUE Board of Trustees, and Prof. Dr. Can Muğan, IUE Rector and academicians and students.

The capsule containing the names of July 15th martyrs was transported into the sky with the high altitude balloon developed by Ecospace Group, consisting of students of IUE Department of Aerospace Engineering, within the satellite development project at the ceremony held as part of the “July 15th Commemoration of Victory of Democracy and the Martyrs, National Unity Day” event.

The Governor, Erol Ayyıldız, in his speech stated that they were witnessing a very significant event on such a meaningful day, and that Izmir University of Economics proved what it meant to be on duty in the name of science. The Governor said, “They’ve established the pillar of science of July 15th. They have displayed how keeping guard in science is carried out. Today we respectfully commemorate Mustafa Kemal Ataturk, the martyrs and veterans of July 15th, and all martyrs and veterans. On the night of July 15th, our public bunched together around the President and took a firm stand against the world worthy of its glorious past. I bow respectfully before our noble public who added a new loop to the loops of heroism. Turkish public has taken a heroic stance on July 15th”.

‘IUE satellite to be launched in 2-3 years’

President Ekrem Demirtaş stated that they remembered and paid tribute the July 15th Martyrs of Democracy at the University, and he said the following:

“They’ve done so much to protect this country at the risk of their own lives. And we, too, with our students, do everything in our power for this country in order to raise our flag higher. I would like to thank Ecospace Group Students. They have done a self-sacrificing job, worked hard ‘till morning time and prepared this high altitude balloon. Their instructors provided guidance and mentoring. They did everything else on their own. And they made a promise to me. We will be placing a satellite of Izmir University of Economics into the orbit in 2-3 years’ time the most. We will not use other countries’ satellites in order to receive and send information. Students of Department of Aerospace Engineering will do everything in their power to enable this country to develop its own satellite.”

Prof. Dr. Barış Özerdem, Head of IUE Department of Aerospace Engineering, reported that the students designed and developed a high altitude balloon which allows testing of mechanic and electronic systems and software as part of the satellite development project. Prof. Dr. Özerdem said, “They wanted to release the names of the martyrs into the sky by means of this balloon. They also placed tubes, prepared by IUE Department of Biomedical Engineering and IUE Department of Genetics and Bioengineering, containing E-coli bacteria, commonly encountered bacteria and the seeds of Arabidopsis into the balloon in order to study their behavior at such high altitude. Based on the simulations, the balloon is expected to go 100,000 feet high. Later, it will return to the earth via a parachute. And meanwhile, a camera will be recording all this”.

Can Bağdiken, student from IUE Ecospace Group, stated that they remembered the martyrs with respect, and they did not want repeat of those days. Bağdiken said they worked hard for days where they would be mentioned in respect to science. 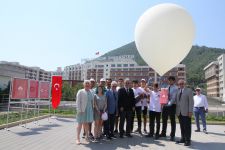 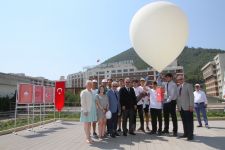